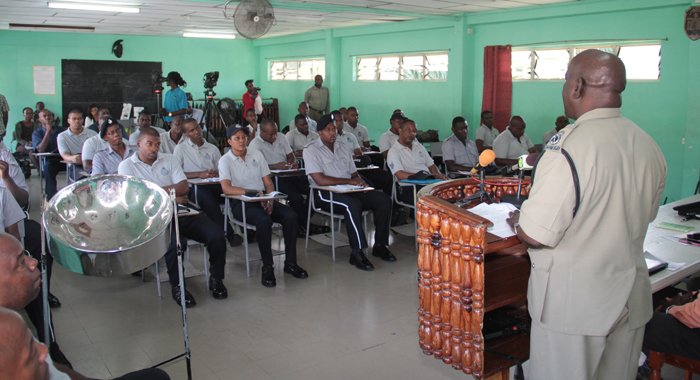 Firefighters to be attached to the Argyle International Airport on Wednesday began specialised training to deal with eventualities that might arise at the facility.

Speaking at the opening of the two-week training course at the Old Montrose Police Station, Commissioner of Police, Michael Charles told the trainees that the

fire fighting training course will take the nation closer to the opening of the airport.

“Because this course is geared towards equipping officers with the requisite training to operate at that facility — the Argyle International Airport,” he said.

The police chief urged the participants to play “real attention” to the training.

“I trust that what you would learn will take us better and move us forward as we develop our small country, St. Vincent and the Grenadines,” he said.

The EC$729 million airport has missed completion deadlines annually since 2011 and is on course to miss the Easter 2016 target that Prime Minister Ralph Gonsalves announced during the election campaign last December.

But Jennifer Richardson, communication officer at the International Airport Development Company (IADC), said that the airport will be completed soon.

She noted that on Nov. 3, 2013 three fire trucks arrived in the country for the airport, which was not yet ready to house them.

“We are here today because the time is fast approaching when those trucks would be needed at Argyle and persons who would operate and care for them must be properly trained to carry out their duties as firefighters,” she said.

She told the ceremony that she was happy to see the start of the specialised training geared towards airport fire fighting.

“Hence, those who would be attached to the Argyle international airport are here today, and it tells me we are that much closer to the start of operations at Argyle. And so, this part of the operations, which is a vital part, is being put in place.”

Walter Cook, a fire fighter trainer from Cincinnati, Ohio, is the course facilitator.

Cook told iWitness News that the training will focus on 16 initiatives, including accountability, leadership, safety of fellow fire fighters, providing the service that the public expects to see when they call the fire service, personal protective equipment, how to put up ladders properly, hose deployment, and first aid.