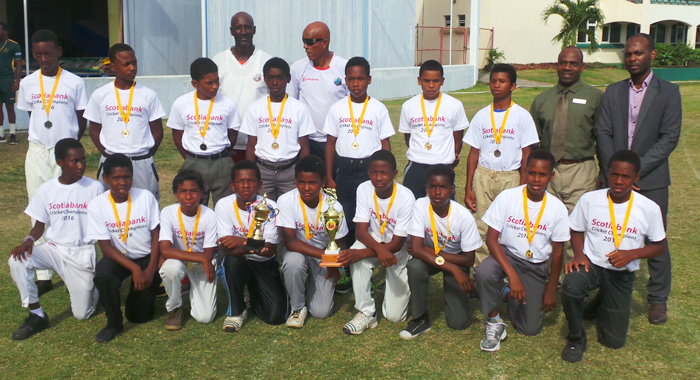 Petit Bordel Secondary, who were asked to take first knock, suffered a telling blow when their captain and leading batsman, Orjay Mathews (10) was run out with the total on 22. With his dismissal, the rest of the batting found it difficult to get the ball away, with no other batsman getting into double figures and five of them not getting off the mark.

Set to score 62 for victory, Sandy Bay Secondary School behind an attacking 49* from Baptiste, raced to the target in quick time getting to 63/1 in 5.3 overs. Derano Lavia (1) was the lone wicket to fall when he was runout with the total on one. The other not-out batsman was Jarique Lavia on 6.

Baptiste, showing a penchant for hitting the ball in the air, struck 4 sixes and 4 fours in his quickfire innings. .

He was later named Player of the Final at the presentation ceremony.

The prize for the most wickets was shared by Ntini Delpesche and Tyrese Francis — both of Thomas Saunders Secondary School — who each got 13 wickets. Delano Moore of the George Stephens Secondary School was adjudged the best wicketkeeper in the tournament.

Speaking at the closing ceremony, representative of Scotiabank, Norman Cumberbatch, expressed satisfaction with the manner in which the tournament was coordinated and the quality of play and assured the SVG Cricket Association (SVGCA) and the Ministry of Education of the Bank’s continued sponsorship.

“We are one of the leading sponsors when it comes to youth cricket and this is borne out by our work with the Kiddy Cricket programme. And based and what we have seen of this tournament, we can say with all confidence that we will be on board again next year,” Cumberbatch said.

SVGCA president, Kishore Shallow, thanked Scotiabank for providing sponsorship to a project, which he said was long overdue in getting on the way.

He asked the young cricketers to try and follow in the footsteps of West Indies U19 opener, Gidron Pope, who was at the ground to train with the Windwards.

“You must try and become good cricketers and you can start by turning up for training for the U15. You have to be serious because there is plenty money to be made from cricket so I urge every single one of you not to waste the opportunity,” Shallow said.

He said that the SVGCA has a lot of plans for youth cricket but hope that other sponsors will join them as Scotiabank has done.

“Just as Kiddies Cricket served as a nurturing ground for Sunil Ambris, Gidron Pope Obed McCoy and Ray Jordan, I am confident that this tournament will provide the platform to facilitate further development of our young cricketers,” she said.

“It is certainly a welcomed addition in the structure of local cricket and has our fullest blessings,” she added.

Neptune also implored the cricketers as well as the coaches and physical education teachers to “redouble their efforts and to continue the process of training and further development” and asked the students to play their part as well.

“Students remember you too have a significant role to play in your development, so I urge you to be disciplined and take your training seriously,” she urged the young cricketers.

Co-ordinator Stanley Hinds indicated that for the month-long tournament there were no acts of ill-discipline at any of the matches.