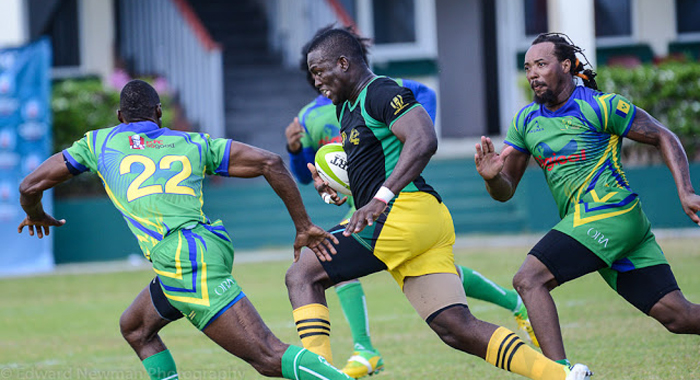 Action in the Rugby World Cup 2019 Qualifier between Jamaica and St Vincent and the Grenadines at Arnos Vale. (Photo: World Rugby/Edward Newman)

Assistant coach of the St. Vincent and the Grenadines Rugby team, Chris Cannito, is still upbeat about the future of the team even though his they were trounced 0-48 by Jamaica on Saturday in the first qualification match for Rugby World Cup 2019.

With the win, Jamaica climbed six places in the World Rugby Rankings to a record high 72nd, while SVG slipped three places to 85 in the rankings released Monday.

Speaking after the lopsided game, Cannito said that although the team suffered a heavy defeat, he was happy that they gave their all in a situation where they were the clear underdogs.

“I could see they guys were giving a hundred per cent and they must be applauded for that because it is not easy to see the scoreboard mounting for the other side and you still on zero. But we all saw what they gave and that is a good thing for the future,” said Cannito, a Peace Corp volunteer.

The Vincentians, in many cases, gave away height and weight to the Jamaicans but Cannito, while admitting that this was so, still did not feel that this played a major part in the eventual results and scoreline.

“Yes they were bigger and stronger but the thing that affected us most was the mistakes that we made in not playing a tight defence and not taking advantage of their mistakes because they also made a few.”

He said that the Vincentians were hampered badly by not having enough match practice going into the game and the added problem of not having a facility where they can go and train for long periods.

Cannito also pointed to the situation where he said that most of the players on the team were either involved in construction work or doing some job of a similar nature with, according to him, “the team’s best player being a garbage collector”.

“These guys get off work sometimes at 4:30, have to scramble to the playing field and, light permitting, may get a half hour solid practise and maybe a bit more at times and they have to compete against a Jamaica team which has been in training at much better facilities for a period of time. These are what have to be taken into consideration when looking at the match,” Cannito said.

He also equated the situation to taking a series of quizzes before the big exam in the case of Jamaica while SVG were thrown straight into the exam room without the required build-up, such as matches against other opponents.

Saturday’s match was played in front of what can be described as a large crowd of about 12 hundred with less than half being natives. In fact, the mix of the crowd appeared to have had an awakening effect on the Vincentians who looked on at the taken seats with jaw-dropping amazement upon entering the venue. The SVG flag was being waved with gusto by those who are being seen as the face of Rugby in St. Vincent and the Grenadines.

President of the SVG Rugby Union (SVGRU), Sophie Goddard, admitted that more will have to be done to gain the confidence of the Vincentian public since she believes that many could turn away on seeing the composition of the executive and persons in the administrative of the sport.

The game, which has been here since 1998, has mystifyingly failed to make much headway with the lack of obvious outreach programmes being seen as a major setback to any advancement.

Goddard said that the SVGRU has begun a “Get into Rugby” programme in the secondary school system with the next step to Primary schools. This programme is part of the World body’s plan to spread the game among young people.

She said that many parents are afraid to allow their children to get involved in the playing of the game because of what they see in the professional game where there are some serious physical contacts. She, however, said that more has been done over the last few years by World Rugby to make the game safer and young people can now play the game with more confidence knowing that their health is being given priority.

Goddard said she was happy with what they had done with the hosting of the event with most things going as planned. She believes that SVG has and will benefit a lot from Saturday’s match.

With conditions hot and steamy, both teams made some changes and it was Reinardo Richards who registered try number five after a bullish run coupled with quick passing and deft tackle evasion. His try in the 48th minute saw the score climbed to 29-0. Another conversion by Groves and tries number seven and eight by Crisdan Grayson in the 59th and 67th minutes took it to 41-0.   The fleet-footed winger Shamar Creary completed the rout with his try in the 73rd minute following a conversion by substitute Steven Scott.