Murder of tourist will ‘retard’ businesses at Wallilabou Bay 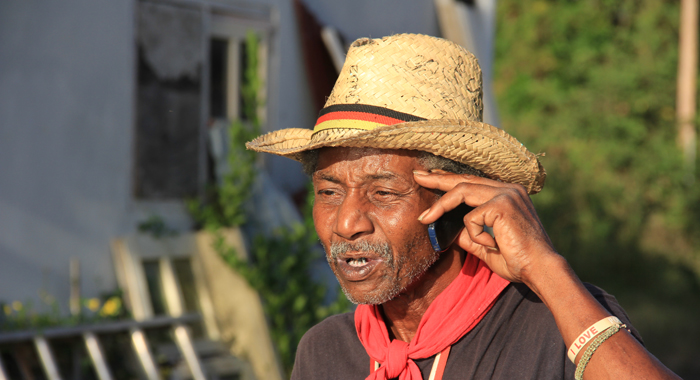 “Pirates Retreat” owner, Anthony “Shadow” on Saturday talks to someone on his cellphone about the fallout from the attack on the yacht last week. (IWN photo)

A businessman who operates a bar at Wallilabou Bay says the attack on a yacht last week that left a German man dead, will negatively affect businesses in the area.

“Of course, these events retard that,” Anthony Edwards, who is also known as “Shadow”, told iWitness News.

“This is where hard currency comes into our country. Tourism is indisputably the leading foreign currency earner in this country,” he said, adding that more can be done to prevent crimes against yachties at the Central Leeward anchorage, where much of the Pirates of the Caribbean sequel was filmed.

Edwards has repeatedly complained via radio about security at the anchorage.

“Wallilabou Bay has economic potential beyond the idiotic, childish imaginations of the community and our people, but especially the community, because tourism has been here a while — even before Disney,” Edwards said.

He said persons in the area can see the value of their properties increase exponentially if tourism is handled right.

“The right kind of tourism, which means where guests can come in and enjoy themselves, feel safe and have a good time enjoying the local culture,” he said.

Edwards, who has been running “Pirates Retreat”, an establishment popular with sailors since it opened 10 years ago, noted that yachties contribute significantly to the Vincentian economy.

“They come in, the only thing they take from us is a memory. They enjoy our meals; they create a market for our products. For the fruits, the vegetables, the meat…

“When we murder them, beat them, steal from them or butcher them, we destroy it,” he said, noting the speed at modern technology communicates information.

“It is a beautiful sunset; beautiful setting sun and not one yacht in this bay,” Edwards lamented during the interview with iWitness News last Saturday, two days after the attack.

“If we do this to them, them we are entitled to enjoy this by ourselves. Forget their economic assistance, which is what they come to give us. Economic assistance to build our home, to build our community, to build our country. If we will kill them for doing that, then, by God, they have every right to say adios, adieu, auf wiedersehen (“Goodbye” in German), and ‘I am not coming back’,” Edwards said.

Police say they are investigating the murder of 49-year-old German accountant Martin Griff, which occurred at Wallilabou Bay during the pre-dawn hours of Friday.

Police are also investigating the attempted murder of Reinhold Zeller, a 63-year-old sea captain, also of Germany, which occurred during the same incident at Wallilabou Bay.

Zeller sustained a gunshot wound to his left shoulder after unknown assailants attacked him on the yacht, police say.

Prime Minister and Minister of National Security Ralph Gonsalves expressed revulsion at the crime and said the Coast Guard responded within 20 minutes.

He said that the Coast Guard cannot everywhere at the same time.

But Edwards said that the Coast Guard has at times proven to be the weakest link in protecting the yachting sector.

“Hell yes,” he said when asked if the thinks that the incident could have been prevented.

“We’ve been burglarised so many times,” he said, adding that persons went aboard a yacht some time recently and reportedly stole cash and electronics said to amount to 5,000 euros.

He that on one occasion, a yacht was burglarised and the captain came to his place to seek help.

While the occupants of the yacht were ashore trying to reach the police and Coast Guard, the burglars went onto the yacht a second time and took what they did not steal during the first break-in, Edwards told iWitness News.

“These people do it all the time because they know that the tourists are not going to stay. They are gone in 24 hours — some of them, in a few hours,” he said.

Edwards was critical of the Coast Guard’s tactics, saying it is easy to distinguish Coast Guard vessels, regardless of the direction from which they approach the beach.

He suggested that the Coast Guard use dinghies to patrol anchorages.

Edwards had made repeated calls to radio stations asking authorities to address the security issues at Wallilabou Bay.

And while three streetlights have been installed on the beach — which he said has helped — Edwards said that has not been enough to deter yacht burglars.

Asked if he is also concerned about his own safety, Edward said yes, adding that he takes steps to protect himself.

These include a Molotov cocktail and lighter that he keeps nearby after dark, which was placed, along with a machete, on the table during the interview.

“This bay, we destroy it; we terrorise guests down here a lot,” he said.

He told iWitness News that a few weeks ago, someone photographed a scene in which nine boat boys were harassing a yacht that was just docking.

There were mixed reviews among the most recent posts on Wallilabou Bay on the travel website TripAdvisor.

The most recent post when iWitness News visited the website Thursday morning was from a trip in February, in which Martyn R of Oxford, United Kingdom said the bay is “simply fantastic with a small number of yachts on their moorings while the tide gently breaks on the shore.

“To say that it is idyllic would be an understatement; after a couple of drinks it was hard to motivate ourselves to leave. Whether you love the film or not, this place is well worth a visit for the scenery, the photographs of the film and the memorabilia. Great experience!” Martyn R said in the post.

The post was made on Monday but made no reference to the attack the yachties last week, which has been widely reported in the international media.

The Caribbean Safety and Security Net’s (CSSN), a website dedicated to collecting and disseminating accurate information relating to crimes against yachts in the Caribbean, said in its 2015 report, that SVG was among four countries accounted for slightly more than 50 per cent of the reports.

The others were St. Lucia, Honduras and St. Martin.

But twice as many crimes against yacht in SVG were reported as in St. Lucia.

iWitness News understands that police have questioned at least four persons in connection with the murder of the sailor last week.

Head of the Criminal Investigations Department, Superintendent of Police Ruth Jacobs told iWitness News on Thursday that no one had been charged with the crime and that the police did not have anyone in custody “at this time”.