Taiwanese charity in LA donates $160,000 in items to St. Vincent 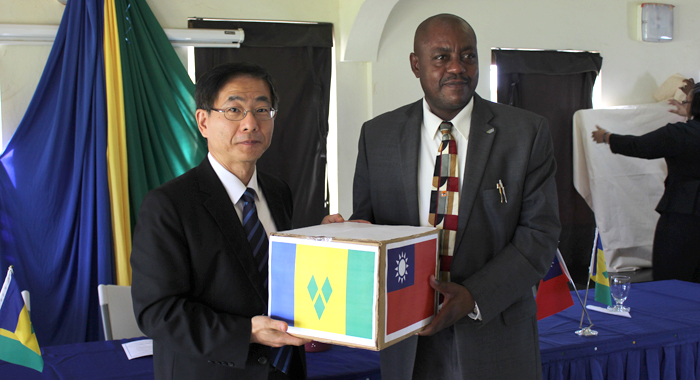 The SimplyHelp Foundation, an overseas Taiwanese charity organisation based in Los Angeles, has donated 422 boxes of clothes, shoes, bags, pillows, soccer balls, ceramic candle holders and cups to the Ministry of Ministry of National Mobilisation.

The items, which have a total value of EC$160,000, were handed over to Minister of National Mobilisation, Frederick Stephenson, by Taiwan Ambassador to St. Vincent and the Grenadines (SVG), Baushuan Ger on Monday.

Stephenson said that not only is the donation in line with the efforts of the Government of SVG to eradicate poverty and to achieve zero-hunger, but it also highlights the strong bond of friendship between Taiwan and SVG.

He pointed out that SVG has enjoyed diplomatic relations with Taiwan for more than three decades, noting that this year marks the 35th anniversary of diplomatic ties.

Over the years, his government and people have benefited from many cooperative projects with Taiwan, Stephenson said.

And, Ger said that the SimplyHelp Foundation is a charity non-governmental organisation founded by Tina Bow and like-minded Taiwanese in the Los Angeles area in 2000.

Over the last 16 years, he said, the foundation has made numerous in-kind or in-cash donations to underprivileged people in Asia, Africa and Central America.

“As a citizen of Taiwan, I am very proud of the charity work the SimplyHelp Foundation has been doing,” Ger said.

The ambassador also pointed out that Taiwan used to be a receiver of foreign aid in 1950s to 1960s and the economic growth during the subsequent decades has fostered the burgeoning development of the spirit of humanitarian assistance in Taiwan’s civil society.