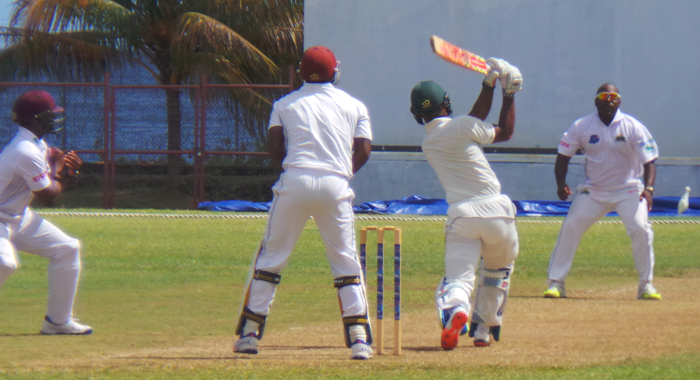 Campbell brings up his century.

Opener John Campbell struck an impressive century — his second at the first-class level as Jamaica Scorpions put together a combative performance on the opening day of their penultimate round contest against Windward Islands Volcanoes at the Arnos Vale Playing Field on Friday.

The left-hander carved out a career-best 135, an innings that propelled the visitors to 284 for 5 at the close on what was a slow pitch.

Captain Paul Palmer, who returned to the team after being dropped, was an unbeaten 31, while Test batsman Jermaine Blackwood scored 27 and Antiguan Devon Thomas, 24 not out.

Winning the toss and predictably choosing to bat, Scorpions, which had suffered 4 consecutive defeats, started positively when Campbell and Shacaya Thomas put up 39 for the first wicket.

Thomas made 14 in just over an hour at the crease before being trapped LBW to Barbadian medium pacer Kyle Mayers.

Campbell then featured in three successive half-century stands to provide sustenance to the innings.

He put on 72 for the second wicket with Barbadian Kirk Edwards — who made 24 before driving loosely at offspinner Liam Sebastien — was well taken by Devon Smith at slip to make the score 111/2.

Campbell then added another 58 for the third wicket with Andre McCarthy, who scored 20 and went in similar fashion to Edwards but this time caught low down by Smith at 169/3.

The fourth wicket partnership with Blackwood and Campbell raised 53 before the latter touched a Cottoy wrong’un to ‘keeper Sunil Ambris at 222/4-the first decision given by Umpire Deighton Butler was making his firstclass debut. Blackwood, not the first time in his career, meekly surrendered his wicket when he lofted Cottoy to Delorn Johnson on the deep extra cover boundary, with just about an hour’s play remaining in the day.

All told, Campbell struck 15 fours and 2 sixes in an innings lasting 192 balls and just under four and a half hours.

He raised his first 50 with a powerful reverse sweep off 80 balls with 6 fours and was unbeaten on 52 at lunch with Edwards on 17 as Scorpions reached a comfortable 85 for one off 28 overs bowled in the session.

The Scorpions took control of the post-lunch session as Campbell dominated, racing to his hundred to be 122 not out at tea with the Scorpions on 197 for 3. The extent of his confidence and dominance was that who moved to his century with a six over long on off Sebastien-moving from 96 to 103 as the Volcanoes looked a disheartened bunch on the field in hot conditions. He survived a confident appeal for a catch at the wicket as he attempted a sweep off Sebastien but umpire Butler ruled that the ball had come off the batsman’s forearm.

But with their opponents seemingly at their mercy, Campbell and Blackwood were out within 15 runs of each other in the final session affected by rain, to leave the Scorpions on 237 for 5. However, Palmer and Devon Thomas combined to add 47 in an unbroken sixth-wicket stand. Thomas though was badly put down by Smith at slip off the bowling of Tyrone Theophile in the dying moments.

Palmer has so far faced 63 balls and counted four fours.

Play was interrupted in the final session for about 34 minutes forcing umpires Gregory Brathwaite and Butler extend the final session to 6 p.m. But when play was halted for the day, a further 4 overs were still to be bowled resulting in a 9:40 a.m. start on day two.

The Windwards Volcanoes gave a debut to West Indies U19 opener Gidron Pope and omitted Larry Edwards and Roland Cato from their final 11, while Jamaica left out Gavon Brown and Jason Dawes.