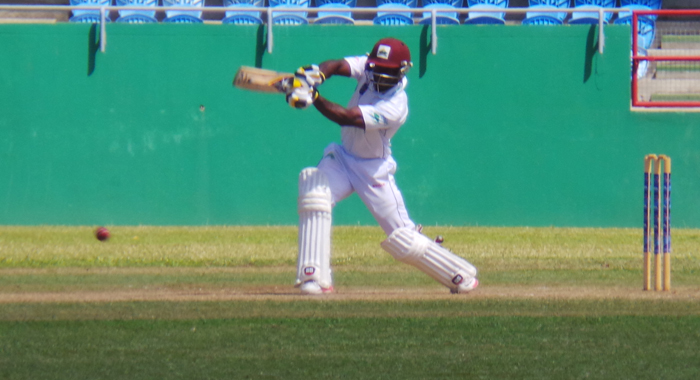 Devon Smith was run out for 26.

Jamaica Scorpions had two century-makers in two days of cricket and now enjoy a healthy 296-run lead heading into a third on Sunday against the Windward Islands Volcanoes.

The Scorpions have struggled with the bat in this edition of the WICB Professional Cricket League (PCL), but over the last two days have been imperious through the efforts of John Campbell, Paul Palmer Jr, and Devon Thomas.

Palmer, 82, and Thomas, 122, came together after Campbell had plundered the Volcanoes for 135 runs.

Beginning Saturday morning on 24, Thomas, and Palmer, 31, set to the task of putting the Scorpions in a strong position and took their partnership to 178 before being separated when Palmer was bowled by fastbowler Delorn Johnson.

Thomas’ 122 came off 166 deliveries and included 13 fours and 2 sixes, while Palmer’s half-century was patient, coming off 186 deliveries, the young captain getting the ball to the ropes on 8 occasions.

The pair of innings left the Scorpions at 445 all out.

The Volcanoes reply is not going as well as they would have liked, with Sunil Ambris, an even 50, the most valiant effort so far.

Devon Smith was run out by the Scorpions skipper for 26.

Jerlani Jacobs scored 31 for the Volcanoes, while Tyrone Theophile scored 16. Gidron Pope made only 14 on his debut before being bowled by Miler.

Cottoy, 4, and Kavem Hodge, 2, are the not out batsmen for the Volcanoes.