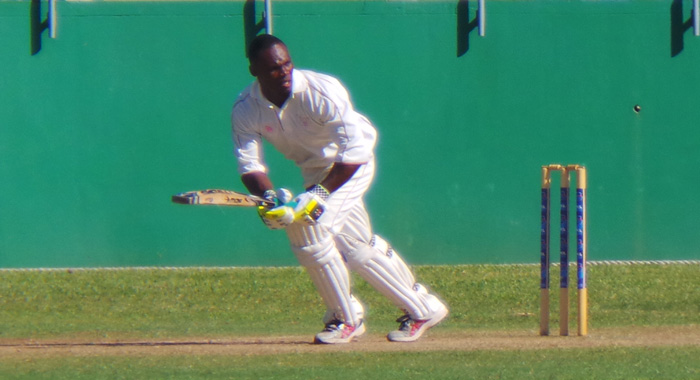 Team officials say Williams opted not play after complaining of some soreness in his legs while McCoy was said to have been occupied with commitments, which did not allow him to make himself available for the season opener.

Carl Joseph Law Chambers ASCO were also affected by the absence of some players including, captain and opener, Desron Maloney. Reports say that Maloney, one of the leading runscorers and top allrounders over the last few seasons, was out of state.

But Maloney’s absence apart, Carl Joseph Law Chambers ASCO put on below par effort with the bat in posting 99 in 18.3 overs, with most of the wickets falling through rash and injudicious shots. Only Rodger Gibson 32* –which included 3 sixes and 1 four — was prepared to occupy the crease.

SVG offspinner Casmond Walters 4/32 and former Windward Islands legspinner 2/35 were the best of the bowlers.

The next two hours and 15 minutes after tea saw some of the most breathtaking stroke play at the local level as the pair added 252 in 23 overs of carnage.

The partnership was broken when Small was caught by Deron Greaves off the bowling of Nerlon Toby (2/55) for 124 made in 148 minutes off 87 balls with 14 fours and 3 sixes. Shallow was next to go with the total on 325/3 when he was bowled by Greaves (2/94) attempting to race the clock for a double century. He faced 103 balls spent 150 minutes at the crease and struck 18 fours and 4 sixes. Team Rivals went to stumps 348/6 and declared overnight.

Faced with a deficit of 249 Carl Joseph Law Chambers ASCO looked to be making a better effort second time around when Greaves (85) and Dasilva (36) added 79 for the first wicket before the latter once again gifted his wicket away lofting the wily Jackson into the hands of long- on. Greaves was then bowled by a Jackson long hop and his dismissal then saw the customary collapse as batting with eight men they slipped from 138/3 to be dismissed 172 in 31 overs. Greaves batted 94 minutes faced 87 balls and struck seven fours and three sixes as Jackson 4/37 and Walters 2/34 once again led he bowling.