Academic concerned about workers movement in the region 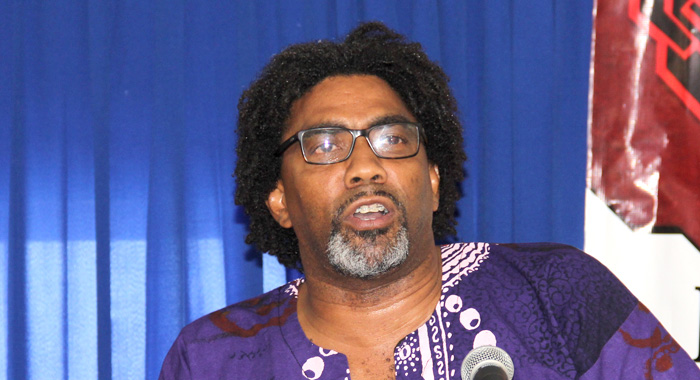 A Caribbean academic has told teachers in St. Vincent and the Grenadines that he is concerned about the state of the labour movement in the Caribbean.

Tennyson Joseph, head of the Department of Government, Sociology, and Social Work, at the University of the West Indies, Cave Hill, said there is a conscious and deliberate coalescing of ideological, economic, and political forces, locally and globally, which have the effect of dismantling the independence post-colonial social contract which had placed the trade union movement at the centre of the independence and state building project.

Delivering the feature address at St. Vincent and the Grenadines Teachers’ Union’s 19th biennial convention in Kingstown on Tuesday, Joseph said that Caribbean societies are in a moment of deep crisis, and the response to that crisis is not to hide behind fantasy or to engage in wishful thinking.

“The response to the crisis is a deep honest diagnosis, which can open gateways to a proper understanding and a correct response,” he said as he spoke on the theme of the convention, “Commitment and Loyalty to your Trade Union: The Gateway to a Brighter Future”.

Joseph said this is the most difficult intellectual and political climate for the Caribbean labour movement in living memory.

“This is perhaps the first time since the early years of struggle for the formal recognition of labour representative organisations in the 1940s and 1950s, that the actual reason for being of our trade unions are being called into question,” he said.

He said the region has witnessed the emergence of new ideological perspectives in which trade unions are now seen as obsolete and as backward relics of a past age.

“There is a new generation of university trained person, schooled only on notions of the so-called Washington Consensus, who participate fully and deeply in the negation of the trade union movement.

“You might know a few of them occupying offices in your ministries of finance and other offices in the public service. Narrow econometricians and accountants masquerading as economists, young and arrogant and full of themselves, and hostile to the trade union movement, but they are at the centre of policy-making in our countries,” Joseph said.

“There are others, some of them former trade unionists, or earlier beneficiaries of trade unionism, who have now transformed themselves into defenders of state power and private capital, and seek actively and opportunistically to destroy and undermine trade unionism. Many of them now use the post-2008 global crisis as a rationale for beating back the aspirations of workers and for opposing the trade union movement.”

He said workers are told that the post-2008 recession requires patriotism and loyalty from our trade unions.

Trade union are further told, he said, that there are certain inescapable imperatives of our time, and anyone who does not accept those imperatives is either unpatriotic, misguided, ideologically stuck in a past age, immature and reckless.

“In the case of a public service union like yours, you are now being told that you should assist the state in implementing policies, which may impact negatively on your membership, but you must do this for the good of the country. You are told that the economic conditions post-2008 are extremely difficult, so every one must play his part.

“What you are not told is that by ‘everyone’ they mean only the working people. It has always been the historical trick of capitalism to privatize gains in times of growth, and to socialize losses in periods of recession.

“Today we are seeing clearly that this this philosophy of privatizing gains and socializing losses is being emulated and applied wholesale in our Caribbean. Indeed it can be safely stated that this has become the defining feature of the current state of Caribbean governance today. Concession and tax breaks for the external investors, but new taxes and lay-offs for the workers — all in the name of the global recession,” Joseph said.

He said these realities have direct bearing on you as a Teachers’ Union in St. Vincent and the Grenadines, and they impact upon all Caribbean teachers unions in much the same way. “As governments face greater and greater challenges in managing their economies, spending on social services in areas like education is drastically reduced. Teachers are asked to hold strain on salary increases, and conditions of work deteriorate as you are asked to do more with less.”

He said that in an effort to weaken trade unions, the enemies of trade unionism are now prescribing that the unions should do more than merely agitate, but should be at the forefront of worker productivity.

“Teachers unions are now being told that instead of making the struggle for better wages and working conditions their main focus, they should change their approach and focus on professional development. They are being asked to develop new pedagogical skills and techniques, and to master the new teaching methodologies associated with new technology. It is as if everyone is now falling over themselves to discourage you from being trade unionists.

“There are some people sitting in our ministries of education who last stood before a class in the 1980s, and who do not even know how to Google, but they are busy trying to deny the trade union of its principal purpose, by telling you that you should focus on improving your technological and pedagogical skills instead of being trade unionists.”

Joseph said that while these things are important,   they are part of the normal professional development that any serious worker undertakes for himself in the accustomed process of self-improvement.

“What we object to is the practice by some persons who want to deny us of our roles as trade union agitators, and to reduce the trade union to a self-improvement club to benefit the employer, while denying workers the commensurate rewards.

As the social conditions of our wider societies deteriorate due to the impact of the economic crisis, more and more pressure is being placed on our teachers to be everything to the students in the school,” he said.

One reply on “Academic concerned about workers movement in the region”