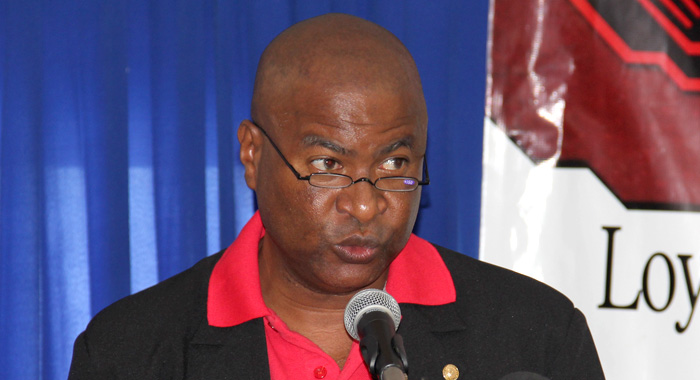 The government in January took back the 2.5 per cent salary increase they gave to public servants last December, according to president of the St. Vincent and the Grenadines Teachers Union, Oswald Robinson.

“The government gave 2.5 [per cent] increase even though they took it back in VAT and tax,” Robinson said to laughter at the union’s 19th biennial convention in Kingstown on Tuesday.

“That’s how I speak, you know. I call a spade a spade. I don’t have anything against anybody,” said Robinson, who was re-elected to office in February for a second consecutive two-year term.

It is the first salary increase for public sector workers since 2011.

Robinson further noted that the government also gave a 1.5 per cent salary increase in January 2016.

“Some people didn’t even realise they received it. Couple teachers called me and asked if they done get it. So, I say, well, probably it was not fully pronounced on the salary slip. Probably there was typing error,” he said to more laughter.

The union leader’s comments came as he spoke about the one-day strike that the Teachers Union called in October.

He said that the strike highlighted a need for greater commitment and loyalty to the union.

He, however, said that the industrial action also brought local, regional and international attention to teachers’ issues in St. Vincent and the Grenadines.

“And I saw, what I experienced was an aggressive, robust public relations exercise. It’s every single day you had to respond to the media,” he said, adding that the union responded accordingly and it was not a political issue.

“We were working, we were fighting for our members. That’s it! … So anybody who wants to stay away from teachers activities and say because — examine yourself.”

Robinson further said the union was forced to do in-depth research.

“A lot of people didn’t know that in the OECS we have the lowest minimum wage,” he said.

The strike also saw growth in membership of the union, with “numerous persons” joining the union in the lead up to the strike.

“We are gaining membership. What does that say? That there is hope and there is confidence in the Teachers Union.”

He said that every time teachers strike, governments have a legacy of attacking the leader.

“They try this divide and rule to mash up the union… So every time the union takes a decision o advocate and agitate for socio-economic justice, the politicians take it publicly and make it a political issue.”

He said some persons follow suit and instead of standing with the union, attack the leadership.

“But you have turned it around, and you need to applaud yourself for that,” Robinson said.

“As a result of the strike, this is what happened. The leadership withstood the test and fought manfully with dignity, pride, courage and determination, a relentless battle and emerged as fine gold to continue to serve this great union and the noble profession.

“It’s because of you. So you have the power to effect the change and you have to do it with all your might regardless of who will be vexed with you.”

He said he cherishes the responsibility to lead the union but called on members to work together, so that they can realise a brighter future.

Robinson told the teachers gathering that there are still outstanding issues, including “the constant violation of the collective agreement, short payment of hard area allowances, the tardiness in the promotion of teachers as graduate and senior qualified assistant teachers.

“Brothers and sisters, I admonish you today. Let us put our individual differences aside. Let us focus and remain committed and loyal. This is our union. This is our voice,” he said.