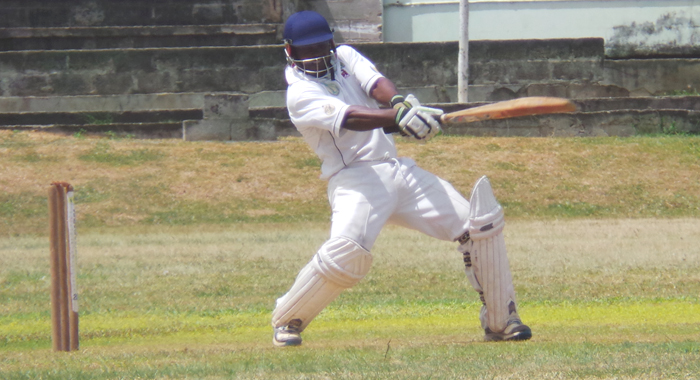 Salvan Browne played a lone hand that saved Police 2 from utter humiliation, but the lawmen still ended their NLA Premier Division match against Victors 1 in a state of ignominy with an innings defeat at the Stubbs Playing Field last weekend.

Winning the toss and choosing to bat, the officers found themselves in heaps of trouble with half the team back in the pavilion with the score 23/5 within the first 5 overs. And things were to get even worse as the score slipped to 29/7, but Browne, who was given a number of let offs by the Victors 1 fielders, took full advantage.

Batting at number six, he refused to be deterred in his approach even as wickets tumbled around him, and, in a counter attacking innings, lashed 70* in the total of 114. He struck 8 fours and 3 sixes off the 73 balls he faced during his 114-minute stay at the crease.

Browne featured in partnerships of 40 for the eighth wicket with Darius Martin (7) and 45 for the ninth with Romario Bibby (3).

Norlan Williams, bowling pace and spin took, 4/31 while Shaquille Browne, who did the early damage bowling with some pace, grabbed 3/8 from 7 overs.

Victors 1 thoughts of an easy afternoon were quickly put to bed as, after an opening partnership of 22 between Atticus Browne (13) and Chrisroy John (20), they quickly jack-knifed into trouble and were uncomfortably placed at 100/7 as offspinner Kenneth Dember (4/74) once again proved a handful against his former teammates.

It was left to Williams (44) to use the long handle to good effect as he carted 5 sixes and 1 four to grab the initiative back from the officers while doing some damage to some bowling figures. Damaul Phillips made 27 as pacer Bibby 3/33 and offspinner Elmore Alexander 3/52 limited the damage.

Police 2, with the task of erasing a deficit of 70, even fell below expectations as having hit rock bottom first time around, lowered themselves into a shaft batting a second time — being dismissed for 65 to lose by an innings and 5 runs.