Residents frustrated as British tourists are robbed in Mayreau 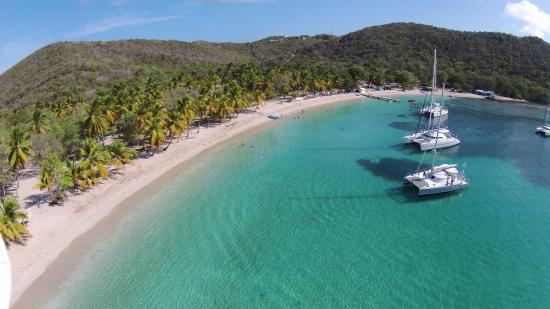 A 61-year-old British man and his 30-year-old daughter were robbed in Mayreau Monday night, triggering among residents a fresh wave of frustration with the number of crimes against visitors to the southern Grenadine island, whose economy depends on tourism and fishing.

Sea captain Richard Kent said he and his daughter were walking back to their boat from Dennis Hideaway around 10 p.m. Monday when they were robbed.

“… we were held up with a cutlass by one guy who just wanted money. We thought Mayreau was the safest island and we had every stolen from us,” Hunter told iWitness News via telephone Tuesday night.

He said the robber took their cash, credit cards, telephone, keys, and glasses.

He said he filed a report with the police, who responded more than 12 hours later.

‘This happened 10 o’clock last (Monday) night and they came here at 11 o’clock this morning (Tuesday) on a private boat from Union,” Hunter said.

He told iWitness News the development was “just upsetting” for his daughter, who is on her first visit to the region.

“It her first time in the Caribbean, which she loves, and it is just so upsetting…”

Hunter, however, said that residents of Mayreau have been “just unbelievably supportive to us.

“And I just hope that they can sort the situation out, because it gives the place a bad reputation.”

It is not Hunter’s first trip to the Caribbean, but it is the first time that he is stopping in St. Vincent and the Grenadines.

He, however, told iWitness News that he hopes the experience does not negatively influence his decision to visit the country again.
“… we sailed up from Grenada through the Grenadines and it is the second time — first time with my wife and second with my daughter. It’s the most beautiful part of the world but it’s just a problem, which has got to be sorted out. Tourists do not like to go places where they do feel unsafe.”

Hunter said that before coming to St. Vincent he had heard about the murder of a German tourist in Walliabou.

“However, it is generally reckoned that the islands, and, obviously, Grenada, are fairly safe,” he told iWitness News.

Among the persons expressing frustration with crimes against visitors to the southern Grenadine islands was Justice of the Peace, sea captain and businessman, Dennis Forde

“The whole island is frustrated. There were three robberies in one month,” Forde told iWitness News Tuesday night.

Force, who manages Dennis’ Hideaway in Mayreau, said that crime is having a major impact on the island.

“It is going to put us all out of business. A lot of security needs to be put in place here in Mayreau,” he said.

“It’s not fair,” he said, adding, “And he’s the guy who keeps things in control here. And Union Island has about four to five or six policemen. I don’t know why they have to take the other one from Mayreau. And the auxiliary can’t do nothing; they are just a help.”

Forde said his hotel and restaurant was burglarised three times in one week and drinks and food supplies were stolen.

“There are a lot of young people on the block (roadside) now,” he said, adding, “And this is something. No work to do, so they are creating their own survival.

“If they don’t have work, it is going to be happening. They just go on the block and smoke and then they look for some way to survive. It is not easy.

“If I get two people in the restaurant, I gotta drive them back, make sure they get back to their boat. Can’t let them walk in the street. This is what it had become to the last month.

“Tourism and fishing is what we survive here by. … And this is a big help for the people. If we didn’t have the tourists here, we don’t survive. We would have to go back to the old time thing: corn fish and go to Grenada.

“So, here we have the tourists and here we have no jobs for the young people so they turn out to be vagabond.”

Forde said the perpetrators have organised themselves into a gang so it is difficult to get information from them.

He further noted that the tourists are on vacation and can’t wait around for a trial.

“So a system has to be put in place that when you catch them, you charge them as long as you meet the evidence with them,” he told iWitness News.