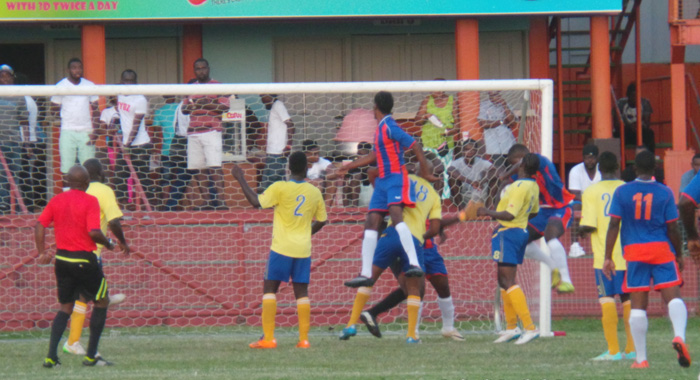 Jackson said that while he saw promise and talent in the First and Under 17 divisions, he was less than impressed by what he observed by the players whoa are said to be the better and batch in the Premier Division.

“I saw where some of our better teams were completing 58 and 60 per cent of their passes; players lacked the proper technique in shooting and they were at a loss when they did not have the ball,” pointed out Jackson, who is also an assistant coach with the senior national team.

He said that the fitness level of the players was also a concern, as many players were seen “walking with their hands on their hips” (teapot position) for a great deal of the matches.

He said that there were players who went about as if they were Cinderellas and, therefore, saw no need to work, an attitude, which he said they take into the national teams, posing problems.

Jackson said that the coaching staff will has to start to look at bringing in some younger players unto the national set-up to change the culture of the team.

Jackson, the third vice-president of the SVG Football Federation (SVGFF), ran the Club championships and said that the tournament had a good completion, but it was not an easy task.

“When I took charge of the event, I was really struggling in the early part. Honestly, I was at a loss but gradually I got my bearing and, with the help of the other members, we sorted things out and despite a few hiccups here and there, we completed this tournament.

Jackson said it was a learning experience and he would be better prepared for the next tournament.

SVGFF President Venold Coombs said the 2015/16 Club Championships were well organized, adding that evidence of this was the tournament being completed in good time to hand the Victoria Park over to the authorities for Carnival preparations.

“Unlike in the past years when there were unnecessary delays in getting the tournament completed, this year, the Committee worked to have it done in good time and succeeded in doing that,” he said.

Coombs was also quick to reiterate how his executive has worked to reignite the flames of football passion among the fans.

“Look at the amount of people in the Park. You never used to be seeing that under (Joseph) Delves them. They never had the game at heart all they wanted was to be in office,” Coombs said of the man whom he replaced at the head of the SVGFF.

Delves a lawyer was president of the SVGFF for one term and left office in October 2011.

Coombs said that teams are now getting more prize monies and that it was his insistent that the prizes be handed out at the completion of the tournament.

He said that football will be played all year in SVG with the national Club Championships and the National Inter-league running consecutively.

On Sunday, a hattrick by Curlon Joseph helped System 3 to the 2016 National Club Championships with comprehensive 3-1 victory over defending champions Hope International in the tournament-deciding match at the Victoria Park.

Joseph netted penalties in the 8th and 25th minutes and added a third 10 minutes from time to propel his team to the title and the EC$10,000 first price.

Kemron Osment scored for Hope International in the 48th minute.

System 3 also won the Female Division after beating Campdonia Chelsea 1-0 through a Shanique DeShong goal in the match to determine the winners of that division.

The presentation of prizes took place following the conclusion of the matches.

System 3, with 32 points, took the Premier Division with Bequia (28) in second and Hope International (26) in third.

System 3, with 13 points, won the female division with Volcanoes (11) second and Chelsea (10) in third position.

Just under 60 teams in three divisions took part in the 2015/16 National Club championships with 14 in the Premier Division, 25 in the First Division, 14 in the Under 17 and 6 in the Female Division.