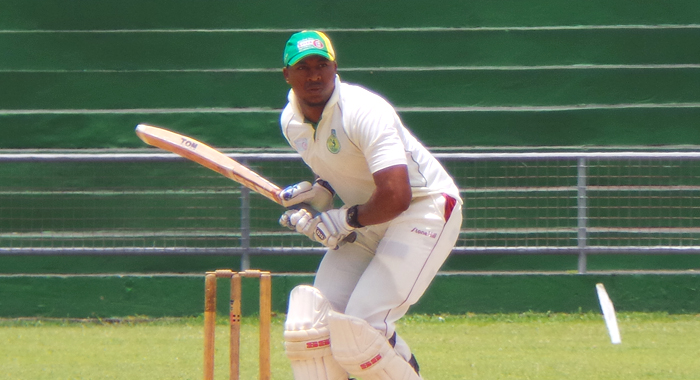 Lime Radcliffe continued their assault on the 2016 National Lotteries Authority (NLA) Premier Division title with a fourth outright victory this time against Police 2 with a six-wicket win at Park Hill on the weekend.

Police 2, who have failed to play with any level of consistency this season, chose to take first use of the uncertain Park Hill pitch after winning the toss. But despite getting what many felt were the best conditions by batting first, the lawmen wasted little time in arriving at their usual area of turbulence.

They, as is the case all season long, found it extreme difficulty in combating spin, and were quickly dismissed 115 in 30.2 overs with opener McLeon Williams (30) being the topscore. Offspinner Dyke Cato 5/67 was once again in his element on the helpful pitch, while Lindon James took 3/13 with his medium pace.

LIME Radcliffe, faced with what looked like a relatively easy target, were quickly on the ropes on 49/6 with offspinner Kenneth Dember and fastbowler leading the Police 2 fight back. However, a series of dropped catches saw LIME Radcliffe, through a 116-run seventh wicket partnership between James and Marcus Castillo, saw them into calmer waters.

Police 2, batting a second time, were dismissed for 165 with Williams and Salvan Browne both getting 44 and Kevin Abraham 28. Offspinning protégé Othneil Lewis took 4/49.

LIME Radcliffe, with two more matches to play, are on 88 points in third position with Victors 1, who are on 93 points, already completed their fixtures and leaders and defending champions Team Rivals on 105, with one match remaining.

Guardian General Saints are on 70 points with one match remaining and will have to get maximum batting and bowling points as well as an outright win to top Victors 1 for a place in the Super 40.