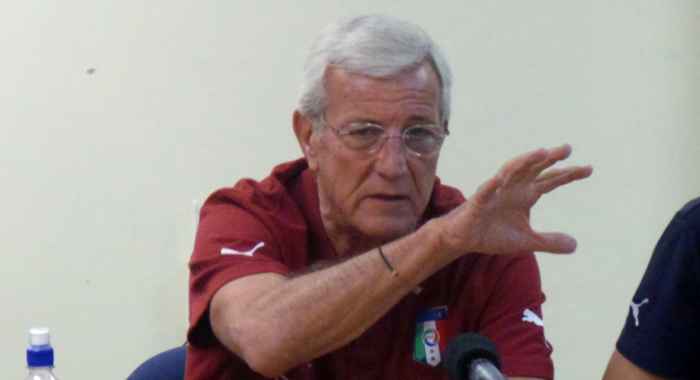 President of the St. Vincent and the Grenadines Football Federation (SVGFF), Venold Coombs has moved to dismiss what he says are misleading statements that the SVGFF refused the services of Italy World Cup-winning coach, Marcello Lippi to work along with the senior national mens’ team – “Vincy Heat” — in their Russia 2018 World Cup Qualifiers.

Reports recently surfaced that the SVGFF had refused an offer reportedly negotiated by the government of SVG and its counterpart in Italy to have a renowned coach work with the SVG team for a period of time as the team prepare to take on the USA, Guatemala and Trinidad and Tobago in the CONCACAF Zone World Cup Qualifiers.

No name was mentioned at the time, but recent suggestions are that the coach in question was actually Lippi who led Italy to World Cup glory in 2006 in Germany.

The pinpointing of the name came following Lippi’s visit to SVG to conduct the first of two high-level football workshops with coaches from Caribbean countries.

On May 2-3, he was in St. Vincent and the Grenadines, where he held a workshop for coaches from Guyana, St. Lucia, Suriname, Trinidad and Tobago and the host country at the National Sports Council conference room. On May 4-5, he held part two of the workshop in Antigua and Barbuda, where he dealt with coaches from the Bahamas, Belize, Jamaica and Antigua and Barbuda.

The programme took place under the auspices of the Italian Olympic Committee (CONI), the Federazione Italiana Giuoco Calcio (FIGC), and the Permanent Mission of Italy to the United Nations in New York with the collaboration of the Permanent Missions to the U.N. of Antigua and Barbuda and St. Vincent and the Grenadines.

Coombs, at the opening of the workshop, had suggested that the governments of both SVG and Italy could find ways where someone of Lippi’s stature could come to SVG for a period of possibly six months to work with local coaches in helping them to develop programmes and to also work with the national teams.

His comments resulted in the accusations, which were raised guardedly initially, being made openly by some people in government circles and their close associates.

Infuriated by the comments which he deemed “dangerous and misleading”, Coombs contacted one individual to clarify what he said were the facts of the matter and to ensure that the comments were not being fuelled from that source.

The president then revealed the information relating to the “Italian coach” saga.

“I was contacted by [an individual] telling me that when the team (Vincy Heat) were in transit in New York on their way to play the U.S., that an Italian coach would be willing to work with the team. I was never given the name of the coach but I said it would not be fair for the local coaches to be working with the team for that long and then have different coach to come in and work with the team just for one week,” Coombs explained.

“What can be achieved in one week where players who have been training one way for months would be asked to start doing things another way? And I took the decision not to allow that to happen because it would have been an insult to the coaching staff and, in addition, in my mind, it was a recipe for confusion”.

Coombs said he was shocked when he heard that word was “out there” that he had refused the services of Lippi to come to SVG to work with the team for three months. He said that there has also been the suggestion that he refused the offer because an official from the SVG Consulate in the USA had painted the state of football here in extremely poor light in a memo to the Italian Foreign Ministry, something that the president vehemently denied.

“That is not true. That never happened and nothing other than what I have spelt out there was responsible for my position on the matter. Why would I refuse the offer of an international coach to come here at no cost to the Federation? I had to be a mad man.”

Sebastiano Cardi, Ambassador and Permanent Representative of Italy to the U.N. at the SVG leg of the programme said the main reason behind the initiative was to bring to the Caribbean region a taste of the Italian football experience.

“For CARICOM countries, football is one of the sports most passionately followed, and national Caribbean teams are regularly represented in international competitions,” Cardi said. “For these reasons, together with CONI, FIGC and the Permanent Missions of Antigua and Barbuda and St. Vincent and the Grenadines, we wanted to draw on this experience and professionalism to further enhance the football skills of the national teams of CARICOM countries.”

Coombs is hoping that SVG and, in particular, the SVGFF will be a major beneficiary of any future assistance the government of Italy is prepared to offer the region.