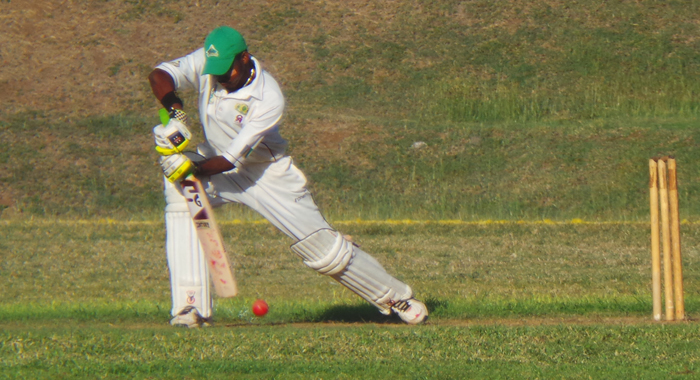 With two magnificent half centuries in the SVG Cricket Association second trial match, opener Atticus Browne once again gave untarnished evidence of his boundless batting talent so choked and stymied by his own woeful indiscretions.

Like the first, the match played Tuesday and Wednesday between a Miles Bascombe X1 and Sunil Ambris X1 at the now “sacred” main Arnos Vale Playing Field to select the senior SVG team for the Windward Islands tournament in Grenada later this month, ended in a draw with allrounder Casmond Walters another standout.

Browne, a stylish left-hander, fashioned the two scores to add to his impressive century (132) on the weekend for Victors 1 against Guardian General Saints at Arnos Vale 2. He also got 43 in the first trial match.

Batting for Bascombe X1, Browne watched as pacer Shacquille Browne (3/48) made early inroads by bowling Desron Maloney (0) in the third over to make it 1/1, then having Donwell Hector (4) playing onto his stump at 2/5 and Bascombe (16) popping one to slip at 3/24.

He weathered the early storm and some showers then added 38 with Jeron John (19) for the fourth wicket but, once again, looked on as John and Romano Pierre (0) went with at the same score-62.

It then took a 62-run sixth wicket partnership between Browne and Seon Sween (17) to pull things around, but even so, no one else displayed any permanence. The opener appeared as the “brown girl in the ring” as he fought a lone hand on a two-pace pitch against bowlers whose one intention was to dispose of any obstacles barring them from a national call up.

He, as is the case when at his sublime best, pounced on the bad balls with great alacrity while defending those that could do damage and ignoring those that required no attention. But on 83 with a century promiscuously on offer, he perished when he lavishly cut a short ball off Obed McCoy (2/48) to point where Rickford Walker held a good catch. He batted 245 minutes, faced 106 balls struck 11 fours and two sixes. He faced 73 dot balls and was the eighth wicket to fall at 172 with the inning ending 15 runs later.

Ambris X1 got off to a flyer with Walker (31) taking 15 runs off pacer Roneil Jeffrey’s first over. But with the dismissal of Walker at 37/1 the fielding team soon got into the ascendancy with some late wickets, as Daron Greaves (19), Marvin Small (3) and Ambris (1) all went cheaply. A cause for concern for coach, Deighton Butler may not be so much the form of Ambris since he has been scoring runs but the fact that he has been out LBW in his last seven innings. On Tuesday, he may have been defeated more by the fact that the ball from Jeffrey kept low than playing across the line.

Gidron Pope (28), batting at number four, looked solid before in the day’s final over, playing no shot to a straight one from Bascombe that struck him in from of off stump went LBW as the total slipped to 98/5.

On day two, Walters (54*) who looked a confident figure in the 20 minutes he batted in the lead up to the close on the opening day, rose to the occasion with a well-played unbeaten half-century. He added 40 with Hooper (29) for the sixth wicket and stayed around through a solid technique and some luck to be unconquered at the end to add to his scores of 43 &53* in the first trial match.

Batting a second time, Browne (53) counted a second half century as Walters and offspinning protégé Othneil Lewis who missed the first day because of exams got among the wickets.

Browne and Maloney (32) raised 72 for the opening partnership in much improved conditions as sun shone through.

Maloney, who had missed most of the season, was the first to go after overcoming some early anxious moments and appearing set for a score was dismissed by Hooper (2/40).

Pierre (2) once again failed with the bat and so too Hector (25) with Bascombe getting 43 his best score for a while. Browne, when once again looking untroubled, badly misjudged a straight one from Lewis (3/40) to lose his off-stump at 91/3. Walters then grabbed five of the last six wickets to finish with 5/37 from 9 overs with 2 maidens.

The match was called off at the completion of the innings late in the afternoon.