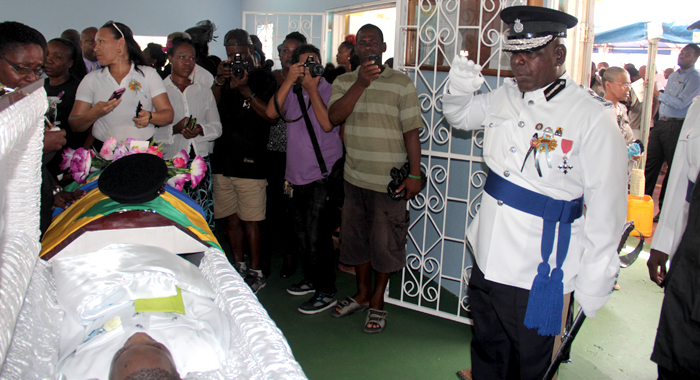 Giovanni Charles, the police constable who was killed while on duty on May 2, was buried in Kingstown on Saturday after a funeral service in which Prime Minister and Minister of National Security, Ralph Gonsalves said that his death is “a wake up call”.

Charles, 25, was stabbed while working at the gate of the Belmont Primary School fair.

Maverick Joseph, an 18-year-old resident of that community has been caused with causing Charles’ death.

Speaking at the funeral at the New Testament Church of God at Wilson Hill, Kingstown, Gonsalves said that the police are the front line of citizens’ civil protection.

“And there is a climate among some sections of the community, including sections who should be very responsible, to see the police as Babylon and as our enemies. Well, if the Police Force is not in existence, life would be nasty, brutish and short,” he told mourners while delivering a tribute.

He said that in the absence of a police force, the “law of the jungle would prevail.

“… only the strongest and those possessed of the resources to provide themselves with abundant security would feel moderately safe.

Gonsalves said he knows that some persons would be saying that at times, in interfacing with civilians, police officers operate outside of the law.

“If you want to see in this Caribbean how, by and large, police treat people, go to Jamaica; go next door to Trinidad. And we are bringing into this country some habits out of Trinidad. And, as we see ourselves more and more in a dangerous neighbourhood, more and more we must give support to the Police Force and to the men and women of the constabulary.”

Gonsalves said it is when things like the death of the police officer happens that “we get our wake up call.

“Talk is cheap. Going on social media and cuss Babylon, calling in on this and that talk radio and run off your mouth with no sense of responsibility, professionals of one kind or another chasing the police, creating a climate where you feel you can do them anything.”

Gonsalves however said that police officers are not perfect.

“But which one of us is? But what we do know that Giovanni Charles exhibited the best and the highest standards of the Police Force,” he said to applause.

“And the best tribute we can give to him, in his death, he gave his life for order and security, for you yourselves to — I’m not asking you to give your life for it, because you are not a police man or woman, but understand it, give it respect — the Force respect, and give them support.”

Meanwhile, Commissioner of Police Michael Charles, said while the death of the officer is a loss to the constabulary, it is a personal lost to the officer’s family.

“Words have little meaning in the shadow of this officer’s death… Constable Charles’ true testimony would not be in the world we speak today, but in the way he led his life and the way he lost his life, providing security, helping a community in a time of need and ensuring that peace, stability and justice are upheld…”

“We all recognise the inherent dangers of our profession and make a conscientious decision to pursue a career in policing with a sense of duty, honour, passion, just like Constable Charles did. We share the common emotion of anger and sorry resulting from his tragic death. We must not let, however, selfish and cowardly act of a criminal contaminate the wonderful memory of Constable Charles’ life…. Please note that Constable Charles died doing what he loved: being a member of the Royal St. Vincent and the Grenadines Police Force, protecting life and property, and preserving public peace,” the police chief said.

The eulogy was delivered by Charles’ cousin, Elisha Charles and the sermon by Pastor Chesley Ferdinand.

Charles was the only child of each of his parents, Susan Charles and Douglas Pompey.