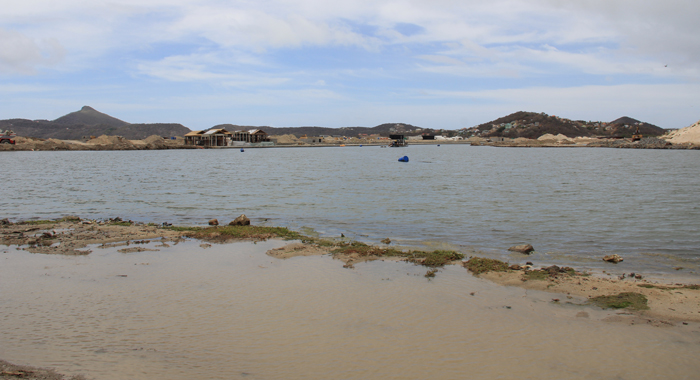 A US$100 million, 125-bert marina for luxury yachts is being built in the south of Canouan. (IWN photo)

KINGSTOWN, St. Vincent, (CMC) —Private investors are spending US$100 million to develop “an ultra-high-end marine community” in the south of Canouan, the Grenadine island where residents are already advocating for access to beaches in the north that are lined with a number of luxury resorts.

The developers of the Glossy Bay Marina say they are confident that they will complete by year-end the first phase of the project, providing 125 berths for luxury yachts.

They say the civil works on the berths will be completed by September and they will be ready to receive vessels by December 2016 — although much of the construction site is still solid ground.

“The concept of the marine community we are developing here, it is facilitating the ease to come in by private jet and corporate flights to the airport and a five-minute walk across the road and the intended clientele, the users of the marina, can just walk into the facility, a secure facility, with berthing for us to 125 vessels,” said Christopher Waddicar, the marine construction project manager, at Glossy Bay Construction Company.

He told state and private media representatives during a visit to the project last Friday that the marina’s “demands are quite high on the electrical grid”, so the company will be generating its own electricity.

There are no springs or rivers in Canouan, and the company will be produce fresh water through reverse osmosis, as well as have its own waste water treatment plant

“Basically our own entire village, and that’s the community we will be supporting,” Waddicar said.

The company’s general manager, Roberto Tudisco, said a flushing channel will ensure that there is no stagnation of the water and minimal impact on the environment is a major consideration.

“We are trying to deliver a limited impact marina for the island of Canouan and in general for the country of St. Vincent and the Grenadines,” Tudisco said, noting that while it is difficult to design a utilities area that has zero impact, his company is working with different entities, such as the state-owned electricity company, VINLEC, “in order not to create any problems in the future”.

“In terms of our own mitigation, we are looking at green roofing all the areas in the utility house to promote the visual impact but putting something back into the environment wherever we can,” he explained, adding that all employees and managers are working within the confines of the best environmental practices established in Europe and the United States.

Permanent Secretary in the Ministry of National Security, Godfred Pompey, who was also part of the delegation, said that part of the requirement by the government is that the company must undertake an environmental impact assessment.

“That study is on-going and at completion must be provided to the minister — that is the Prime Minister, for review. So, it is a basic requirement of the project.”

The company is pushing hard to meet the December 2016 timely, and has been utilising shift systems over the past 10 months, employing 350 nationals.

“And the intent is to try and maintain that high level of employment through the development and the phased development of the community not just for the provision of the services to the boats and the community but the immediate supporting goods and services that will be required from locals to be brought in to furnish these vessels when they come in…” Waddicar said.

The investors are now at the stage where they are putting together all the operational manuals and trying to determine the number of employees that will be needed to run the marina.

Tudisco said that some parts of the marina will require 24-hour supervision and then the marine operation would need about 20 employees.

“But what I can tell you, we will employ locals for sure,” he said.

Pompey said he was also informed that arrangements will be made for the training of locals to work on these mega yachts.

“There is a training programme that will be developed.”

Tudisco said the idea is that the locals will be sent to train overseas “with the full knowledge in order to be important parts of the management and maintenance of this place”.

But while the work is continuing apace, there is still uncertainty as to whether the project would be completed on schedule.

Tudisco acknowledgedthat it will take time, “but working night and day, we think we can make it without any problem.

He said further that the geology of the area, which has sand under just six feet of earth, will help them meet the December 2016 target.

“We are keeping and rescheduling and analysing all our data that is coming from performance and so forth. And, to be honest with you, we don’t see why we cannot make it for December,” Tudisco said.

“It has to be [an] extreme problem, but with the pace we are taking, with the commitment of my colleagues, all the workers, I don’t see why we cannot make it. … We say for December operational, December it will be,” he added.

But the development is taking place on a 1,200 acre island, two thirds of which have already been leased to investors.

Tudisco said there is no formal programme to sensitise the local community about the project, and that he has been in Canouan since 1997, and most of the employees of the marina has been working with him since then.

“We don’t have any problem at all with the village, because we believe that the local, the Vincentian — I am Vincentians too — they are an important part of this project.

He said that over the past three months, the company has been communicating with the village and telling them that they can come to the area where the marina is being built.

“They can enter, go to the beach and do anything they want, once they leave the place as they found it. And so far, we don’t have any problems,” he said.

Last year there was a very public fall out among investors on Canouan, resulting in the investors in the marina moving to the south of the island.

“We never had any problems before. And now I am working with Glossy Bay, I try to tell them we, along with the village, are important parts of this project. So, basically, we are working together. In our organisation, there is a limited expatriates that work in our structure. The rest are Vincentians and we are proud of what we have done.”

Prime Minister Dr. Ralph Gonsalves has said that in time Canouan will contribute more to the local economy than the northern Grenadine island of Mustique — renowned internationally as the playground of the world’s rich and famous.