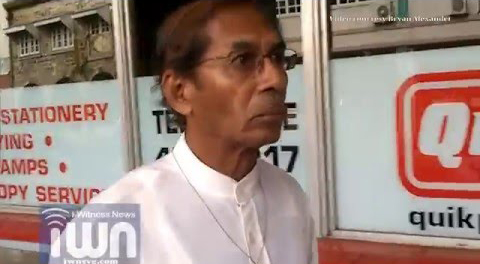 The Organisation of American States (OAS) team that observed the December 2015 general elections in St. Vincent and the Grenadines (SVG) says that the returning officer for Central Leeward, Winston Gaymes, was biased toward the ruling Unity Labour Party (ULP) during the final count in that constituency on Dec. 10.

Central Leeward is one of two constituencies in which the opposition New Democratic Party (NDP) is challenging the results of the general elections, which electoral officials say were won by the ULP.

The OAS on Friday released its final report on the general elections, in which it commented on its observation during the final count at the Layou Police Station.

Gaymes and the Election Clerk, Clyde Robinson as well as the two contesting candidates in that constituency — Sir Louis Straker of the ULP and Benjamin Exeter of the NDP, along with several agents for each candidate were represent at the count.

Members of the Royal St. Vincent and the Grenadines Police Service who were observing or assisting with the process of the final count, while multiple other officers (several of them armed) secured the room in which the count took place and the building itself, the OAS said.

“During the period witnessed by the OAS Observers, the RO routinely ignored attempts by the NDP agents to gain his attention, responded to their concerns or objections in a dismissive or exasperated fashion, or complained that they were wasting his time. On the other hand, concerns voiced by ULP agents were immediately addressed and in one particular instance converted by the Returning Officer into a new instruction for the counting process. It was notable that the instruction was revoked only after a lead ULP agent agreed that it should be,” the OAS said.

The report also said there was incorrect application of seals on ballot boxes.

“On several ballot boxes, while tie-locks had been placed in the required locations around the perimeter of the box and through the flap covering the slot, the seal was not placed across the slot itself,” the report said.

It said that in some cases the seal was placed on the flat part of the box cover, in a fashion similar to a sticker.

The OAS said that in one case, CL-D — located the Barrouallie Government School — the seal was not on the box at all, but was wrapped around one of the locks.

“The NDP agents noted that in these cases they could not be certain that tampering had not taken place, and requested that the Returning Officer note their concerns.”

The OAS also spoke of the issue of the absence of the presiding officer’s stamp and initials on some ballots:

“In two ballot boxes, which were both incorrectly sealed, a number of ballots had neither the stamp nor initial of the Presiding Officer. As this applied to the ballots for both the ULP and the NDP, and as the relevant ballots had been cut in such a way (on the slant) so that a small portion of the ballot had been removed along with the counterfoil, it appeared that the Presiding Officer had simply removed the counterfoil in such a way that his/her stamp and initial remained on the counterfoil itself.

However, the OAS said that notwithstanding its concerns, its observers “did not discern any fraudulent or other activities at the Final Count which could have materially affected the outcome of the vote in which the ULP candidate won by 313 votes.”

The OAS said the issues it raised in the report “indicate a need for further training in rules and procedures for staff at all levels of the electoral machinery in order to reduce or eliminate the variations observed in the treatment of the ballots and ballot boxes.

“A greater awareness of the need for professionalism and impartiality in the conduct of the electoral process, and closer screening of senior electoral officers to ensure that they comply with this indispensable requirement, will help to ensure citizens have greater faith in the electoral process and its stewards,” the OAS said.

The NDP has filed election petitions challenging the result of the elections in Central Leeward and North Windward.

Those petitions will be heard on May 27.

Regional and international observers have declared the elections free and fair, but the NDP is maintaining that the ULP stole the vote.

The ULP was returned to officer for a fourth term by a one-seat majority, a repeat of the December 2010 election results.