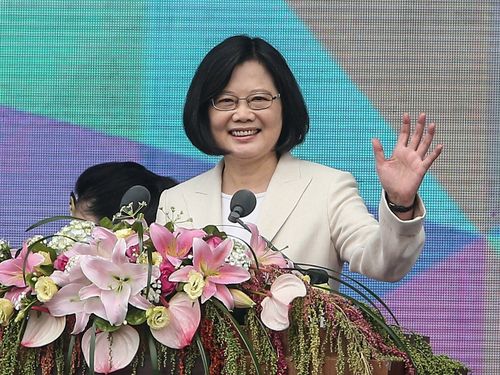 St. Vincent and the Grenadines is among a 22 countries that recognise Taiwan as an independent nation, although China says it is a renegade province, to be reunited with the “mainland” — by force if necessary.

The CARICOM nations of Belize, Haiti, St. Lucia and St. Kitts and Nevis, along with CARIFORUM member, the Dominican Republic, also maintain diplomatic ties with Taipei.

In her inaugural address on Friday, Tsai thanked her nation’s allies “for their longstanding assistance to Taiwan and for giving us the opportunity to participate in the international community.

“Going forward, through governmental interactions, business investment and people-to-people collaborations, we will continue to share Taiwan’s experience in economic development and build lasting partnerships with our allies,” she said.

“Diplomatic and global issues” was one of five topics that the chair of the pro-independence Democratic Progressive Party (DPP) focused on during her address.

She said her government wants Taiwan “to fulfill our duty as a citizen of the world and contribute towards diplomatic and global issues.

“We will bring Taiwan closer to the world, and the world closer to Taiwan. With us here today are many heads of state and delegations,” she said.

Tsai, a former vice premier, won 56 per cent of the votes in the presidential election on Jan. 16, her second attempt to become the country’s first female head of state, having failed to unseat President Ma Ying-jeou of the Kuomintang (KMT) in 2012.

She is also her countries first unmarried president, and the first to take the presidency without ever having been mayor of Taipei.

She said Taiwan has been a model citizen in global civil society.

“Since our democratisation, we have persisted in upholding the universal values of peace, freedom, democracy and human rights. It is with this spirit that we join the alliance of shared values and concerns for global issues. We will continue to deepen our relationships with friendly democracies including the United States, Japan and Europe to advance multifaceted cooperation on the basis of shared values.”

Tsai said her government will “proactively participate in international economic and trade cooperation and rule-making, steadfastly defend the global economic order, and integrate into important regional trade and commercial architecture. We will also not be absent on the prevention of global warming and climate change.”

She said that her administration will create within the Executive Yuan an office for energy and carbon-reduction and will regularly review goals for cutting greenhouse gas emissions in accordance with the agreement negotiated at the COP21 meeting in Paris.

“Together with friendly nations we will safeguard a sustainable earth,” Tsai said.

“At the same time, the new government will support and participate in international cooperation on emerging global issues including humanitarian aid, medical assistance, disease prevention and research, anti-terrorism cooperation and jointly tackling transnational crime. Taiwan will be an indispensable partner for the international community.”

She is only the second non-KMT president, and comes to office at the end of Ma’s two-term, eight-year presidency, which was characterised by closer ties with Beijing.

On the issue of Taipei-Beijing relations, Tsai said her government will conduct cross-Strait affairs in accordance with the Taiwan’s constitution, the Act Governing Relations Between the People of Taiwan Area and the Mainland Area, and other relevant legislation.

“The two governing parties across the Strait must set aside the baggage of history, and engage in positive dialogue, for the benefit of the people on both sides,” she said.

“We are also willing to engage in candid exchanges and pursue possibilities for cooperation and collaboration with the other side of the Strait on our common participation in regional development,” she further stated.