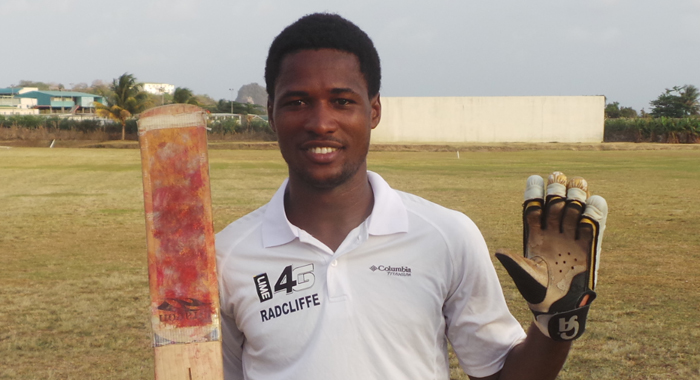 Local cricket selectors have named a 14-man squad to represent SVG at the senior Windward Islands tournament in Grenada May 27 – June 4.

The two are opening batsman, Gidron Pope and left-arm seamer, Obed McCoy. Pope was a standout player in the tournament in all facets, which gained him selection to the world team at the end of the event. McCoy, a tall left-arm seamer, had his campaign cut short after suffering a hand injury.

Since the tournament, Pope has seen inconsistent action at the domestic level with his local club team, News Spartans being dumped out of the NLA Premier Division, after losing two matches by default.

The talented left-hander appeared to be in good form in the limited action he has seen with a best score of 83 in the first of the trial matches. In addition, he has shown an inclination to “put his head down” and occupy the crease with most of his innings being in the region of two hours and more. He is expected to be an important part of the SVG batting in partnership with another left-hander, Atticus Browne at the top of the order.

McCoy, for his part, has not “set the world on fire” as he has met with little opportunities with the ball since his team, Team Rivals has relied on a spin-biased attack for most of the season. In addition, McCoy, who is still in the infancy of his craft, still has to play second fiddle to the pacey Kesrick Williams and the slippery and consistent Roneil Jeffrey.

With Williams out through injury and experienced pacer Delorn Johnson called up for the West Indies A Team, the selectors included McCoy as a 14th player.

In the team’s batting eyes will be especially on Browne, who has been in sublime form this season.

Seen by many over the years as a player of immense potential, the 24-year-old Victors 1 opener, in 2016 unveiled that talent, which has been kept latent by his unnecessary excursions into turbulence. He culminated his season with 132 against Guardian General Saints and scores of 43, 83 and 53 in the trial matches. These were in addition to a series of good scores in difficult conditions in the season.

Donwell Hector, 28, who is making a return to the team after a one-year Sabbatical, is also expected to be one who the team would be looking to for runs. He showed some good domestic form with 321 runs at an average of 54 with one century and a 91 but the manner of his dismissals with some injudicious shots would be a concern for both the team management and the player himself.

Ambris, who has been consistent all season, and Miles Bascombe, who has been struggling for runs, fill the other two batting places. Coach Deighton Butler though, notwithstanding Ambris’ form, could be a bit concern with the fact that the player has been out LBW in his last seven innings.

Rodney Lawrence, whose batting has improved tremendously over the last two seasons even at the expense at his offspin bowling, slots in as a sixth batsman, with Ambris being the keeper as well.

Lawrence, a tall right-handed upright batsman, has been among the runs this year and was one of the architect of his team, LIME Radcliffe winning the 2016 NLA Premier Division. His century (116) against Saints at the Sion Hill Playing Field saw him batting for more than four hours while playing with ease against both spin and pace.  While in the past he had shown great potential with the ball, in 2016 his focus was more with the bat and behind the stump as a replacement for captain Lindon James who, it was said, was troubled by an injured finger.

Allrounder Casmond Walters, who was omitted in 2014 despite scoring a century and two half centuries in the trials that year, has left the selectors with little space this year. Having chosen to ply his craft in the UK Leagues in 2015, Walters, 27, returned this year with another horde of quality performances in the season and the trials. While he did not score the 300 plus runs as he did in the previous years he was outstanding with the ball with 23 wickets @ 12 apiece. In the trials, he had scores of 43, 53* and 54*. He also picked up 5/37 in the final match with his offspin.

The bowling will be led by veteran pacer Kenroy Peters, along with Johnson and the vastly improved and pacey Shaquille Browne with Kenneth Dember to shoulder the spin department with Alston Bobb (left-arm spin) and Keron Cottoy (right-arm legspinner) both unavailable.

Team Rivals’ captain Asif Hooper, a left-arm spinner and attacking batsman, McCoy and Jeffrey will wait in the wings for their chance to impress, while openers, Daron Greaves, Romano Pierre and Rickford Walker and offspinning protégé Othneil Lewis await any SOS as they mark time in the reserves.

The tournament will be the two-day round robin format and will be of added significance to some players with the Windwards Volcanoes Franchise set to offer a new set of contracts to players, while still keeping the “pay to play option open as per the WICB directive and agreement.