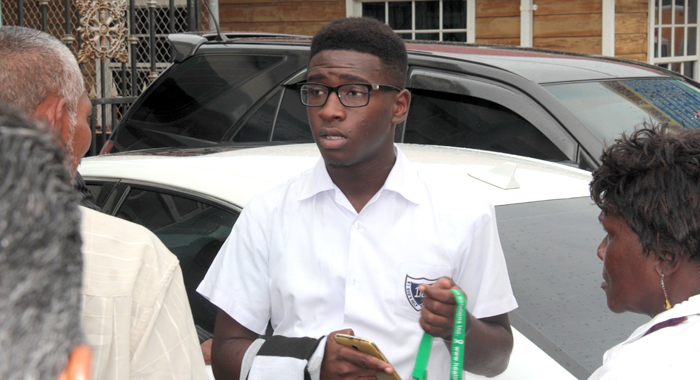 The highly-charged case in which opposition New Democratic Party (NDP) politician, Ben Exeter and one of the party’s youth activist, Shabazaah GunMunro George are being tried on a number of charges will continue on June 20.

Magistrate Bertie Pompie on Monday allowed a two-week adjournment to allow George, a student at the Intermediate High School, to write his examinations.

On Monday, George,18, wore his school uniform to his trial, which is into its third day.

Exeter, who was the NDP’s candidate in Central Leeward in the December 2015 general election, is charged that on Dec. 29, 2015 at Kingstown, he assaulted Corporal 632 Morris, acting in due execution of his duty.

He is also charged that at the said date and time he resisted the arrest of Corporal 632 Morris, acting in due execution of his duty.

George is charged that on Dec. 29, 2015 at Kingstown, he obstructed Corporal 632 Morris, acting in due execution of his duty and had in his possession an offensive weapon, to wit a zapper.

They have both pleaded not guilty to the charges.

On Monday, the court heard evidence from De Freitas who assisted in taking Exeter to the Central Police Station on Dec. 29.

De Freitas said he resigned from the Police Force in March.

He told the court that while he and Corporal 632 Morris were taking Exeter to the Central Police Station, an individual came in front them taking pictures.

De Freitas said the individual was walking backwards as the police officers advanced.

The former cop told the court that he did not pay much attention to the individual, but remembers that it was a dark-skinned male.

During cross-examination, defence counsel Israel Bruce asked Defreitas if anyone held on to Exeter as he was being taken to the police station.

He said a civilian who he knows well and who lives in the United States held on to Exeter very briefly.

“That civilian is not this young man. Am I correct?” Bruce said as he placed his hand on the shoulders of George, who, along with Exeter, were sitting as per a request by fellow defence counsel, Kay Bacchus-Browne.

The witness said George was not the civilian who held onto Exeter.

“Let me ask you, Mr. De Freitas. If someone was to tell this court that this young man pulled Exeter from Mr. Morris, that would be a lie?” Bruce said.

“I didn’t see that, Your Honour,” De Freitas responded.

In response to the lawyer’s questions, De Freitas said there were a lot of other persons taking pictures but he would not be able to say whether they were taking still photographs or videos.

“You see, Mr. De Freitas, I am putting it to you that if you had known, you would not have said a lot of the things you are saying to the court now. I am putting that to you. What say you?” Bruce said.

De De Freitas responded: “I told the court what happened as I recalled them.”

“I am putting to you if you had known that some of those people may have been taking video pictures, what you are telling the court now, you would not have said it. You agree or disagree?

De Freitas further told the court that he could not say whether the person who was walking backwards in front of the police officers and taking picture was in the court on Monday.