Kickstart trio off to Jamaica this weekend 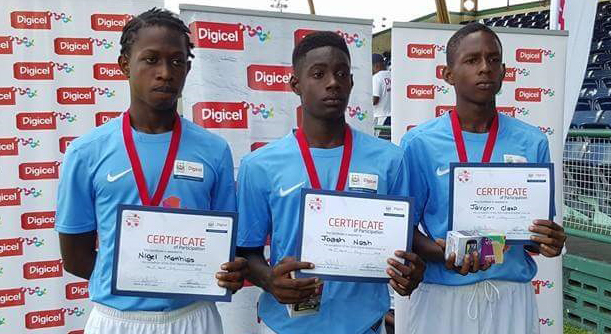 The trio was selected to participate in the regional programme by Manchester City FC coaches, following two days of intense training at the Arnos Vale Sports Complex on May 4th and 5th, during the local leg of the Digicel KickStart Clinic.

The Vincentian players will join 39 other top young footballers from across the Caribbean and Central America at the week-long Digicel Academy, where they will receive another round of intensive training from the Manchester City FC coaches.

The boys will then have the opportunity to further impress the coaches, in the hopes of being among the top eight footballers who will get another life changing experience — to train at the City Football Academy; Manchester City FC’s elite training and youth development facility in Manchester, England.

The three Vincentian teens will be accompanied to Jamaica by Digicel’s Marketing Manager, Danielle Cupid, who said she has no doubt that the Vincentian youths will represent St. Vincent and the Grenadines well and even move on to the next phase of the Kick Start Programme.

Cupid explained that in the past two Kickstart Clinics Vincentians Deno John and Derron Rouse stood out and are today still benefitting tremendously from participating in the Digicel Kick Start Programme.