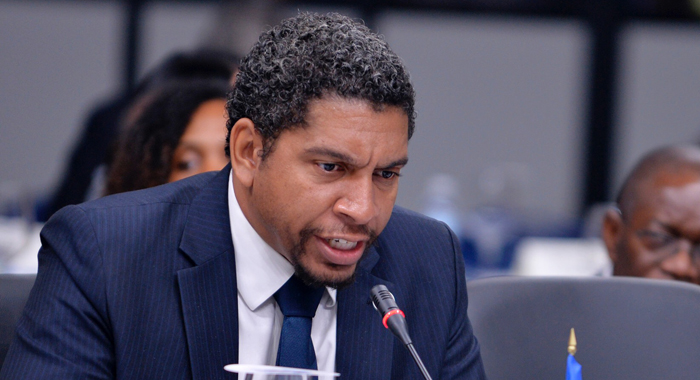 Minister of Economic Planning and Sustainable Development, Camillo Gonsalves addressing the 46th General Assembly of the Organisation of American States in the Dominican Republic this week.

St. Vincent and the Grenadines (SVG) has again raised the issue of the decision by the Dominican Republic to strip persons of Haitian descent born in the Spanish-speaking Caribbean country of their citizenship, thereby rendering them stateless.

Camillo Gonsalves, Minister of Economic Planning and Sustainable Development raised the issue during his address at the 46th General Assembly of the Organisation of American States in Santo Domingo this week.

He said SVG stands “ready, as always, to contribute in whatever way possible to assist our beloved brothers and sisters in the implementation of any home-grown, structured, measurable, and clearly articulated commitment to redress an acknowledged human rights crisis”.

The meeting was held under the theme “institutional Strengthening for Sustainable Development in the America”.

Gonsalves told the meeting that participants’ focus on institutions, endorsement of the Sustainable Development Goals (SDGs) and presence in the Dominican Republic “demand an honest assessment o the national and multilateral efforts to redress the ongoing human rights crisis that was triggered by a retroactive decision of the Constitutional Court of the Dominican Republic that rendered thousands of Dominican-born citizens stateless, and set in motion a process of deportations, civil and law enforcement actions that were, at worst, at least partially informed by the race and ethnicity of the affected citizens”.

A Sept. 23, 2013 ruling by the Constitutional Court in the Dominican Republic denies Dominican nationality to anyone born in the country after 1929 who does not have at least one parent of Dominican blood.

Kingstown has maintained that Santo Domingo cannot use sovereignty and the doctrine of non-interference in a country’s internal affairs to shield itself from criticism over the court ruling that essentially renders stateless 250,000 persons of Haitian descent born in the Dominican Republic.

Gonsalves told this week’s meeting that the collective history of CARICOM is “indelibly scarred by forced mass migration, statelessness, and iniquitous institutional racism.

“That history, and our continued struggle to triumph over its lingering effects, has informed CARICOM’s visceral abhorrence to the re-emergence of any such human rights violation within our proud Caribbean civilization. CARICOM has also sought, actively and in good faith, to dialogue with the relevant authorities in moving towards a fair and just solution to this problem,” Gonsalves said

He noted that Goal 16 of the SDGs — adopted by the United Nation including OAS member states, last year — speaks to “Peace, Justice and Strong Institutions,” adding that this is closely related to the theme of the assembly.

Among the targets of Goal 16 is to “provide legal identity for all, including birth registration,” Gonsalves noted.

“Nowhere in our hemisphere is this issue more urgently felt than within the confines of this existing human rights crisis,” Goonsalves said, adding that his country applauds the European Union for its new commitment to provide seven million euros to the effort, which may lead to the registration of an additional 45,000 Dominican citizens.

“José Martí reminds us that ‘No land feels more solid under a man’s feet than that where he was born,’ and ‘No man can long exist without a country, nor can any country exist for long without liberty.’ Within that compelling framework, we are eager to extend our hand in friendship on this matter, and fully confident that we can reestablish our modern Caribbean civilization as one that has mastered, and is not mastered by, our difficult past,” Gonsalves said.