Journalists told to pay to report on P’tani pageant 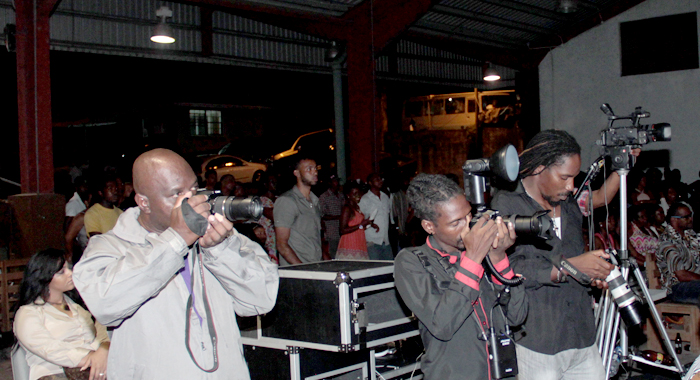 Journalist Ashford Peters, left, and other media workers at Friday’s show. Peters was made to pay to enter the venue. (IWN photo)

The two most senior of the media workers who turned up to cover the Miss P’tani pageant in La Croix on Friday were made to pay to enter the venue, while other media workers entered for free.

Journalists Kenton X. Chance of iWitness News and Ashford Peters of The News newspaper were shown the ticket booth when they presented their press credentials at the gate.

Both media outlets had published earlier in the week stories that the pageant would be held on Friday.

It has traditionally been the practice for the organisers of rural carnival activities — and the Carnival Development Corporation events in Kingstown — to allow free entrance to journalists who attend the show to report on it for their media outlets.

Both journalists have in the past been allowed free entrance to the Miss P’tani show, on which they have reported.

At least 10 other media practitioners, including journalists, videographers, photographers, were at the show on Friday.

Only Chance and Peters were asked to pay to enter.

When Chance and Peters were told that they had to pay, they stood outside the gate and discussed whether they should each pay the EC$15 entry fee or return home.

While there, two other media workers entered without paying. They later said that the doorman, the committee’s “head of security”, initially asked them to pay, before Marks intervened.

Chance and Peters, considering that they had travelled from South Leeward and East Kingstown, and acting in the interest of their readers, decided to pay the entrance fee.

When the situation was called to the attention of chair of the P’tani Carnival Committee, Ronnie Marks, he apologised for the development, saying that had he not intervened, two other media practitioners who entered the venue before Chance and Peters, would have been made to pay.

During the show, emcee Shevrell “Candy Man” Mcmillan, who is also a media worker, acknowledge the media outlets covering the show.

He later learnt that Chance and Peters had been made to pay and told Carlos “Manage” James, a member of the organising committee, in Chance’s presence, that the two journalists should be refunded.

James said he was at the ticket booth when Chance and Peters entered the venue but said he did not know that the two journalists were made to pay.

He said he would correct the situation.

After the show, Marks facilitated an interview between Chance and Zakiyah Mofford, a full figured contestants who was a hit with patrons.

Marks again apologised to Chance for the entry fee development.

Chance jokingly told Marks, that his committee had given him (Chance) a second story.

Marks responded equally light-heartedly that there were many stories at the show, a reference to a relative of one of the contestants who publicly registered with him her disappointment in the results of the show.