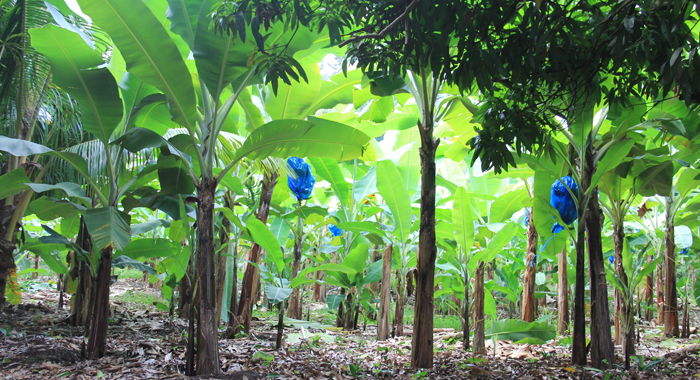 A banana farm in St. Vincent and the Grenadines. (IWN photo)

Projects under the Banana Accompanying Measures (BAM) programme will soon commence with the disbursement of EC$18 million.  The projects include the construction of a greenhouse facility and improvement of the feeder road at Montreal, upgrade of the Langley Park banana packing facility, construction of on-farm infrastructure for banana and livestock, and a food science laboratory at the St. Vincent and the Grenadines Community College.

Plans to implement these projects were disclosed at a press conference at Cabinet Room on Tuesday. In attendance at the press conference were: Prime Minister Ralph Gonsalves European Union (EU) Ambassador to the Organisation of Eastern Caribbean States (OECS) and Barbados, Mikael Barfod; Minister of Economic Planning, Camillo Gonsalves; Minister of Agriculture Saboto Caesar; Director of Planning Laura Anthony-Browne; Permanent Secretary in the Ministry of Agriculture, Raymond Ryan; Coordinator of the BAM programme, Ricardo Frederick, and other staff of the Ministry of Agriculture.       Barfod said it was a pleasure for him to be in the country to “announce the signing of contracts” for the projects under the BAM programme. The ambassador said the disbursement of the funds meant that St. Vincent and the Grenadines in collaboration with “the EU have utilised 98

Furthermore, Barfod described the plans of the Ministry of Agriculture as both challenging and ambitious, especially, in regards to the greenhouse park. He stressed that the EU “has provided strong support” and will continue to work with the Government to ensure that structural changes are made to “unleash the agriculture potential to create wealth and jobs and ensure good nutrition for the benefit of the nation.”

Prime Minister Gonsalves said he is happy that the allocation of funds under the BAM programme has come this far. He noted that these tendering processes have several challenges. To this end, Gonsalves recognized the work of Coordinator of the BAM programme, Ricardo Frederick, who, according to Gonsalves, is “the person who over the past several months who has been really pushing this, and who has gotten a lot of work done”.

The main objective of the BAM, Gonsalves said, is to “reduce the levels of poverty in our country through increased production, investment, exports and employment in the agricultural sector”. These, he said, will be done through strategic interventions under the BAM by increasing banana, livestock, fruit, and vegetable production.

Caesar called the announcement of the disbursement of funds a “great day for farmers in SVG and the agriculture sector on a whole”. Minister Caesar assured Barfod that the funds under the BAM programme will be put to good use.

He mentioned plans to recommence banana exports to the United Kingdom, saying, “Currently, we are over producing for the regional market in terms of bananas and it is time for us to set the framework as to how we are going to export to the extra-region.” He added that the Ministry has started to address certification issues.

“This is going to put them (farmers) in great stead for us to return to UK market”, Caesar said. He expressed his appreciation for the BAM projects “since we are pushing all our efforts to return to the United Kingdom market”. He emphasised that farmers will be the beneficiaries under these upcoming initiatives under the BAM programme.

Also, Ceasar referred to a conversation he had with Chief Executive Officer of WINFRESH, Bernard Cornibert, about a study that will be conducted in SVG to lead to the cultivation of some 250 acres of bananas.