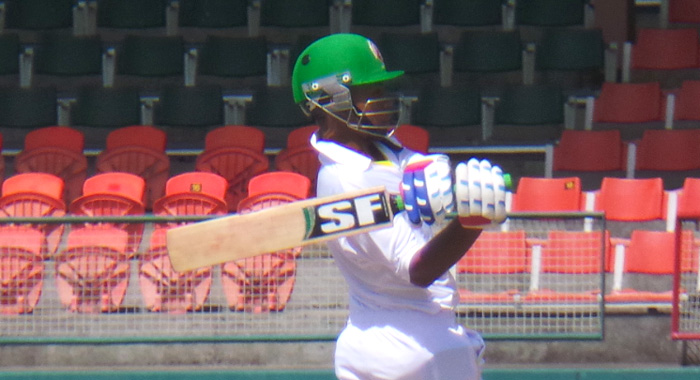 Despite defending champions, St. Vincent and the Grenadines taking first innings points from Dominica in their two-day drawn match in the opening round of the WINLOTT Windward Islands Under19 cricket tournament, coach Irvin Warrican was less than impressed with the team’s batting.

Speaking about the match, which ended Tuesday, Warrican felt that the batmen, whom he said are very talented, failed to stick to the basics.

“They were just not prepared to be patient and occupy the crease. You cannot make runs from in the pavilion and, therefore, when you get the opportunity to bat, you have to be prepared to put a price on your wicket,” former Windward Island offspinner said.

In the SVG first innings, Tijourn Pope got 50, while Jeremy Layne got 42 and Warrican was full of praise for the two, whom he said showed maturity and responsibility in the way they batted.

He said that players have to recognise the opportunities and monies, which are on offer in cricket now and must focus on developing their game to benefit in a big way.

Dominica, who were sent into bat, reached 189 thanks to captain, Alick Athanaze 68, Brian Joseph 33 and Deon Burton 25 who in partnership with Melvin DeFoe (18) had raised 51 for the first wicket. SVG’s captain, Othneil Lewis took 5/48 with his offspin and left-arm spinner Rasheed Fredrick 3/52.

Warrican said he was satisfied with the work done by the spinners but felt that there was still room for improvement with consistency. He was, however, not happy with the fielding, which he said left much to be desired.

In their reply, SVG were then put under tremendous pressure and needed 38 runs ninth wicket partnership between Shane Roberts (22) and Frederick (14) to see them to first innings points.

Batting a second time and with a deficit of seven runs Dominica showed enterprise by scoring quick runs in order to get a declaration and did so at 193/8 something which impressed Warrican.

“I think they showed real initiative in the way they went about their second innings and try to get an outright win that was thinking cricket and it is a food sign”.

In the Dominica innings, the principal scorers were Deon Burton 56, Kissim Peltier 43 and Alick Athanaze 42, as Lewis 3/53, Ronaldo Franklyn 3 for 24 and Tijourn Pope 2 for 36 shared the wickets for SVG.

In the other match at the Sion Hill Playing Field, which also ended in a draw Grenada took forst innings points from St. Lucia.

The tournament ends on Sunday.