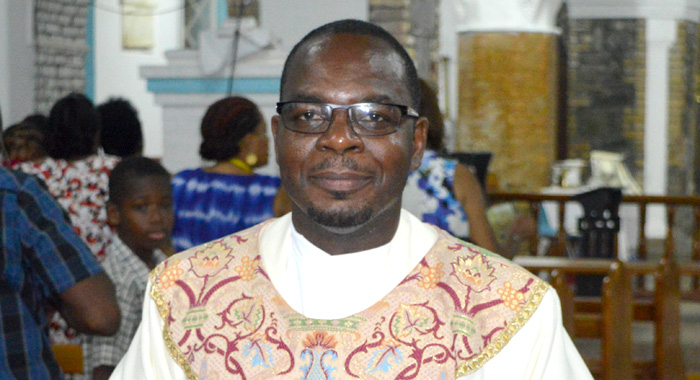 A service of thanksgiving was held last Friday — the Feast of St. Mary Magdalene to commemorate the 20th anniversary of the Ordination to the Holy Priesthood of the Venerable Otis Samuel Nichols.

The service was held at the St. Paul’s Anglican Church, Calliaqua, the same venue where Nichols was installed and ordained to the Priesthood on July 22, 1996 and celebrated his first Mass on July 23, 1996.

Incidentally, Nichols was named Rector of St. Paul’s Calliaqua with St. John’s Belair in 2010 and has spent the last six years in the parish until he was recently named as Archdeacon of St. Lucia in 2016.

He is married to Jenine Lisa Regisford and their union has produced three daughters. Archdeacon Nichols has served extensively throughout the Diocese of the Windward Island and has for many years worked with the youths of the Anglican Church.

Delivering the sermon at the service, he spoke on the topic: “The Inclusive Vocation”, quoting John 20:17 – “Go to my brothers and say to them, ‘I am ascending to my Father and your Father, to my God and your God.’”

He noted that women have always been faithful in their worship in the church. “Mary is given the title, ‘Apostle to the Apostles.’ We borrowed that title from an early Christian leader, Bernard of Clairvaux. This title helps us remember what honour was given her by Jesus at the time of his resurrection,” he said.

He added: “The church I grew up in had women in major leadership roles, but not at worship. Only boys were acolytes. There were no women priests. I lost my mentor/ father to the movement for the ordination of Women. Or perhaps he lost me, as I intentionally chose not to follow. I am thankful to God for opening up His Church, so that we can say today that this church is open equally to leadership and service by all persons.”

Nichols has worn many hats over the years having served as Priest in Charge of Christ the King, Hillsborough, Carriacou with St. Francis Harvey vale and as Priest with Oversight, St. Andrew’s Grenada with Holy Innocent, St. Giles and Paraclete. At present, he serves as Diocesan Secretary and Diocesan Representative to Provincial Synod.

No doubt, as rector of one of the largest parish in St. Vincent and the Grenadines, he was recently put in charge of the Parish of St. George and St. Andrew in Kingstown with the death of Dean Patrick McIntosh in January, so there is no doubt in anyone’s mind that he is cognisant of the need for vocations within the church

“This church, St. Paul’s Calliaqua has again and again been a place of vocation, a place where men and (thank God) women too have heard God’s call and have discovered in their heart of hearts that nothing matters so much as saying Yes to that call. This is a place where vocations to full-time Christian ministry have been discerned, fostered, nurtured, celebrated and translated into lifetimes of faithful and fruitful work. I pray that it may be so again.”

He added: “We are short on vocations just now, especially from younger candidates. We urgently need persons in their teens and twenties, as well as older, to be saying, Yes, I believe the gospel; Again and again this call comes as the voice of Jesus breaks through tears of sorrow, as with Mary; through doubt and distrust, as with Thomas; through previous failure, as with Peter.”

Nichols opined that the call to full-time Christian ministry comes as a renaming, the gift of a fresh identity, the call not just to do something but to be something, someone in whose total dedication to the gospel the power of the resurrection has full scope to work in the world.

He has touched many lives throughout his 20 years of Ministry within the Anglican Church having served as Assistant Curate in the Parish of Holy Trinity Georgetown; St. George’s Grenada; Priest in Charge of St. Mathew’s, Biabou and more recently as lecturer/teacher and Deputy Principal of the Bishop’s College Kingstown, the only Anglican Church Secondary School.

As he reminisced on his 20 years of ministry, he delineated that at age 17 he had already had his heart set on becoming a priest, the former banker employed with Caribbean Banking Corporation (CBC) noted that despite the challenges he wouldn’t trade being a priest for anything.