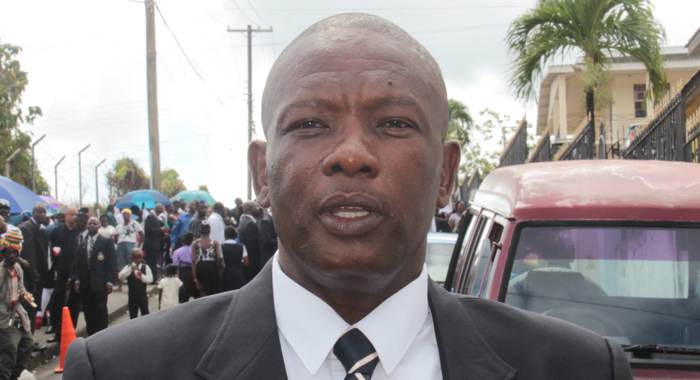 Inspector Calvin Glasgow at the funeral of fallen colleague, PC Giovanni Charles in Kingstown on May 14, 2016. (IWN photo)

Inspector Calvin “Gold Teeth” Glasgow, number 285, was enlisted in the Royal St. Vincent and the Grenadines Police Force on Jan. 10, 1986. Upon his retirement on June 6, 2016, he had spent 30 years and four months as a member of the constabulary. During the early part of his career, Mr. Glasgow worked at the Process Department where he was involved in the court procedures. He was later transferred to the Traffic Department. The majority can attest that Mr. Glasgow was a police officer who carried out his duties with pride, dignity and confidence. In my own experience, having had the opportunity to work with Inspector Glasgow during my tenure at the traffic branch, I found him to be a very firm, honest, hardworking, fearless individual, and, most of all, truly a disciplinarian. His general demeanour was exemplary. He took pride in his general decorum as one was able to see one’s face in his boots; his sparkling white shirt and well-seamed trousers could have been spotted from afar off, along with a neatly trimmed haircut made this man an impeccably groomed police officer.

It is while working at the Traffic Department that many persons came into contact with this noble person who later became a household name in St. Vincent and the Grenadines. He was well respected and talked about around the region and even in North America. He commanded the streets of Kingstown with pride and authority. He prosecuted all that broke the traffic rules and regulations regardless of your status in society. I have no doubt that Mr. Glasgow developed some enemies along the way especially among the “van drivers” who saw him as being on their backs all the time. Some say Glasgow would just appear without them seeing which direction he came from. This, no doubt, created a fear among some drivers who dared to think about breaking the traffic rules. Some may recall the words of the song “Vroom Vroom Sketel Coming, Vroom Vroom Look out for Gold Teeth” by Dennis Bowman during the carnival season some years ago. Kenneth “Vibrating Skates” also paid tribute to “Gold Teeth” in his song some years ago as well. This is to show you the impact that this man has had on many persons in our society. Although some may have hated him at the time for him taking action against them, looking back, some of these said individuals indicated that they were wrong and respected him. I remember travelling to different parts of the region and persons would ask, “Who is this bad traffic man in St. Vincent?”

He spent long hours on the job and was considered a workaholic. He was a well-rounded police officer who completed several courses both locally and overseas. He worked at the Chateaubelair and Georgetown police stations, where he gained more managerial experience. These training and experiences propelled him to manage his juniors in a new diversity of modern policing. The question many persons ask is why wasn’t Glasgow promoted to be a part of the policy-making body of the organisation, which he undoubtedly deserved? Is it because he was fearless? Or was it because he wasn’t singing from a certain song-sheet? Was it the internal mechanism or external interference? Is this the way we treat persons who have served our organisation with such passion and dedication? All these questions must be answered seriously by all concerned, otherwise, there may be many more Inspectors Glasgow. Happy retirement, sir and thanks for your contribution not only to the Royal St. Vincent and the Grenadines Police Force but to the Government and People of St. Vincent and the Grenadines. May God continue to bless you with long life and in all your future endeavours.

3 replies on “In honour of Inspector Calvin ‘Gold Teeth’ Glasgow”