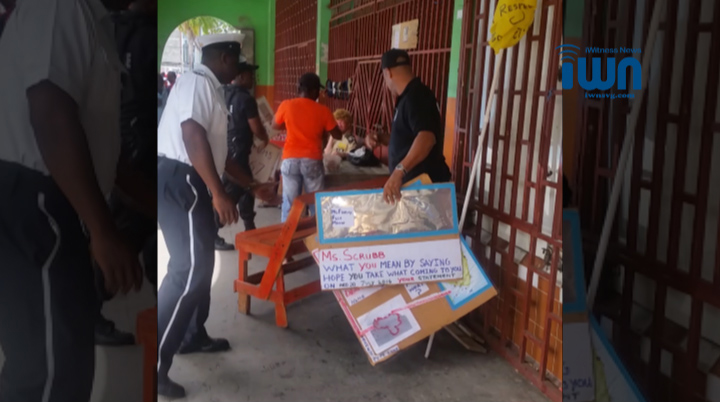 ASP Timothy Hazelwood and other police officer removed protest material from the “Frontline” in Kingstown on Friday.

Persons who have been protesting in Kingstown since the announcement of the results of the Dec. 9, 2015 general elections say they will not back down after police again removed their placards, flags and other protest paraphernalia on Friday.

Glenda Jack, a vendor who takes place in the protest, said she was on the “Front Line” — the area on Back Street, Kingstown where the protest has been taking place since Dec. 10, 2015 — when Assistant Superintendent of Police Timothy Hazelwood came sometime between 10 and 10:30 a.m. and asked her who was in charge of the items.

“I say, ‘Ask me no question’,” Jack told iWitness News in Kingstown, where protesters had gathered for a meeting Friday afternoon.

Jack said that Hazelwood again asked the question then proceeded to rip down the placards from the façade of a building and threw them into a police pick-up truck.

Hazelwood, who is head of the Rapid Response Unit of the Police Force, was accompanied by another officer from that unit and two traffic cops.

Jack said he also removed the articles of furniture.

Other persons who normally take part in the protest said that the police also took their dominoes, bullhorn, food containers, and flags.

“He did not tell me why they are taking the stuff,” Jack told iWitness News.

Jack said someone had brought a piece of galvanise sheeting for her to make into a grater for her farine operation and the police took that also.

She, however, said that she was not protesting at the time.

“I was sitting with me peanuts and them. I was selling. I … sell peanuts on the picketing line,” she said, adding that she does take part in the protest.

Rohan Simmons of Diamonds said he noticed the police operation as he was walking toward the area, having exited a bus a few moments earlier.

Simmons filmed part of the operation on his mobile phone.

“As I [was] walking down, I noticed Mr. Hazelwood was taking down the placards them and throw them into a transportation. Then I take out my phone and began videoing and he was like ‘Get away from here. Go up the road. Stop the recording.’ So I was like, ‘Why should I stop?’ So I continued videotaping the process,” Simmons told iWitness News.

Simmons told iWitness News that the actions of the police will not deter them from protesting.

“We are not going to stop. We are going to beef it up this time because this is not Julian Francis, Ralph Gonsalves, Camillo, Isis, Storm — we all are Vincentians and this country belongs to all of us. I, Rohan Simmons, will die for my country,” he said, but did not say why that might be necessary.

The protest has been taking place next to the Electoral Office, and protesters and the opposition New Democratic Party, who they support, have accused Supervisor of Elections Sylvia Findlay of wrongdoing in the Dec. 9, 2016 general elections.

The NDP has filed matters in court relating to the results of the elections, which officials say the ULP won by taking eight of the 15 seats, compared to seven for the NDP, a repeat of the 2010 poll.

But about four hours after the police operation, another protester, Dexton Williams of Sion Hill, was erecting placards again on the façade of the building where D’s Services were located, the same area from which police had removed the placards earlier.

“We are executing our democratic right to do so, and, second to that, this building is not owned by the government and the proprietors of this building have granted us permission, to endorse their expression from their rails… Verbal permission,” he said.

Williams portrayed Hazelwood as overzealous and acting in pursuit of a promotion.

“Mr Hazelwood, of all the police officers in St. Vincent and the Grenadines, is trying to hype himself for some vacancy they probably have as a quick pick within the Police Force in terms of chain of command.”

Williams also expressed displeasure that former commissioner of Police Michael Charles has retired without addressing the issue of items that police had earlier removed from he picket line.

“So he deserves a certificate for being a commissioner of police who [retire] from the Police without addressing some items which rightfully and legally belong to some protesters.”

Luzette King, the leader of the protest, had recently expressed concern about the waning support for the demonstration.

Time will tell if the actions of the police will reinvigorate the protest, as has been the case in the past.