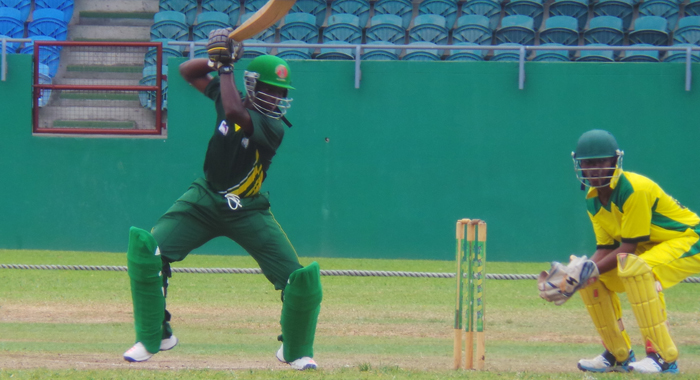 The Windward Islands and Barbados chalked up victories over Jamaica and Trinidad respectively by way of the Duckworth/Lewis system while there was a no-decision in the match between the Leewards and ICC Americas, in round two of the limited phase of the Regional U19 cricket championship.

The Windwards behind good batting and bowling powered to a 10-wicket victory over Jamaica at the main Arnos Vale Playing Field in a match affected by rain and reduced to 46 overs initially.

Winning the toss under gloomy skies and asking their opponents to take first knock, the Windwards took charge from early as the Jamaicans slipped to 15/2 in the fifth. They recovered marginally but with the constant fall of wickets never looked like posting a challenging total.

Jeavor Royal once again contributed to the Jamaican cause with 26 while Javelle Glenn 24 and Dominik Samuels 20 also chipped in.

The Windwards, with a revised target of 117 off 33 overs, began the chase at a canter and ended with a gallop as openers Anil Mathew 58 and Yohan Jeremiah 53 took full advantage of the diet of longhops and half volleys served up by the Jamaican bowlers.

Mathew struck 10 fours off the 53 balls he faced while Jeremiah had 7 fours and 1 six off his 85 balls as they completed the victory in 22.4 overs.

Over at the Sion Hill Playing Field, in another match affected by rain and reduced to 46 overs as well, Trinidad and Tobago, asked to bat first, reached 150/5 off 43.4 overs when the rains curtailed the innings. Big-hitting Joshua Dasilva, who opened the innings, topscored with 65 with 8 fours and captain Kirstan Kallicharan got 26. Barbados Captain Nicholas Kirton took 2/20 and Deswn Currency 2/32.

Barbados, set a target of 123 off 25 overs, were taken to victory by another brilliant innings by opener Leniko Boucher (73*) and Shemar Springer 27* as they featured in an unbroken 72-run third wicket partnership to see them home at 124/2 in 20 overs. Boucher, who made a century in the three-day competition, struck 6 fours and 2 sixes.

And, at the Park Hill Playing Field in a match reduced to 30/30, the Leewards were 45/3 off 10.2 overs when rain forced umpires to call off play.

In results of matches in the first round, Jamaica defeated Trinidad and Tobago by 6 wickets at the Sion Hill Playing Field.

Over at the Arnos Vale Cricket Ground, Guyana won its first match in this year’s outing, when they defeated the ICC Americas by 6 wickets.

Barbados defeated Leewards by 7 wickets making 106 for 3 in 22.3 overs in reply to the Leeward Islands 105 all out in their clash at the Parkhill Playing Field.