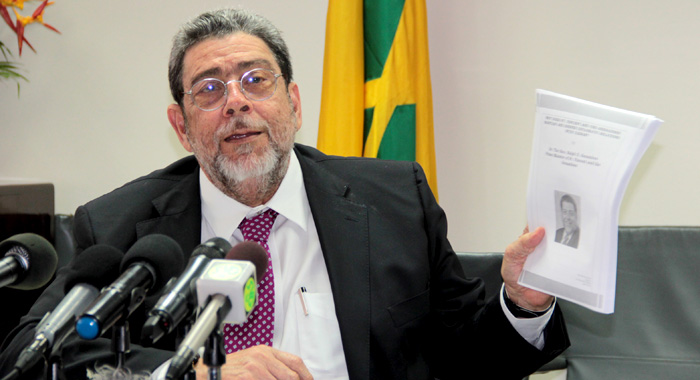 Prime Minister Dr. Ralph Gonsalves on Tuesday holds up a copy of his paper on SVG-Taiwan ties. (IWN photo)

Prime Minister Ralph Gonsalves has written a paper outlining eight “compelling statements and conclusions” in support of St. Vincent and the Grenadines maintaining relations with Taiwan.

The article was released on Tuesday, one week after the main opposition New Democratic Party (NDP) said that it has revised its foreign policy and would end Kingstown-Taipei ties and establish diplomatic relations with China if elected to office.

But Gonsalves said that it is “overwhelmingly in accord with the national interest of St. Vincent and the Grenadines, that it maintains and strengthens further, formal diplomatic relations with the Republic of China (Taiwan).

“This conclusion takes account of several critical factors including: The real condition of St. Vincent and the Grenadines as a vulnerable, small-island developing state in the Caribbean; the history of very beneficial relations with Taiwan; the actual condition and circumstances of Taiwan including its developed country status, and its shared fundamental values with St. Vincent and the Grenadines”.

Gonsalves said the position of his Unity Labour Party on SVG-Taiwan relations is also justified by the huge, and increasing, trade and investment ties between Taiwan and “mainland” China, the on-going rapprochement between Beijing and Taipei particularly since 2008, and continuing.

Kingstown-Taipei ties, which were established in 1981, have remained intact even as a number of CARICOM nations have abandoned Taipei for Beijing. There were fears that the ULP, which came to office in 2001, would have joined this exodus mid-decade, in light of Gonsalves’ criticisms of the Milton Cato administration when it chose Taiwan rather than China 35 years ago.

Speaking at press conference on Tuesday where he read from the paper, Gonsalves acknowledged his position in 1981, but said that history has shown that Cato made the right decision.

He said the issue of SVG’s relations with Taiwan is “not an ideological one, for or against ‘mainland’ China; it centres on our country’s national interest, including its 35-year relationship thus far”.

Gonsalves said it is a simple fact that China can no longer properly be called “socialist”, adding, “it is in a real sense integrated, like Taiwan, in the global capitalist system with a particular brand of Chinese capitalism, but under the direction of a government headed by the Communist Party of China.

“The switching-of-relations between the … China and … Taiwan, back and forth, is an obsolete option in today’s world.  It is archaic rubbish in our increasingly globalised world and the place of … China, … Taiwan and St. Vincent and the Grenadines in it,” Gonsalves told reporters and live media audiences.

He said that Taiwan, though much smaller than China in land area and population, is a wealthy developed country.

“It is the 21st largest economy in the world and it has the 5th largest foreign reserves of any country in the world.  Comparatively small countries (geographic size and population) deliver massive benefits to other countries which are much less endowed materially such as St. Vincent and the Grenadines.  The benefits delivered to St. Vincent and the Grenadines by relatively small countries such as Venezuela, Taiwan, and Cuba have been extraordinary,” Gonsalves said in the paper.

He said that since 2008, Taiwan and the China have agreed that they would desist from poaching each other’s diplomatic allies and not engage in any “bidding process” to secure additional diplomatic alliances.

“Political parties, especially those in Opposition, have no authority to determine the foreign policy of a country.  Governments make those determinations,” he further pointed out.

The prime minister further pointed out that it is most unlikely that the NDP has had any structured discussions with any leader or high-ranking or authoritative diplomat of the China on the matter of breaking diplomatic ties with Taipei and establishing them with the Beijing.

“Far more likely is a transactional interaction between persons within the NDP leadership and middlemen/women, adventurers, and seekers-of-profit of Chinese and other national origins who hold themselves as representing the position of the People’s Republic of China,” Gonsalves said.

He added: “These middlemen/women, adventurers, and seekers-of-profit are interested primarily in securing: a monopoly in St. Vincent and the Grenadines to sell economic citizenship and our passports; to appropriate, for a song, prime real estate owned by the Government of St. Vincent and the Grenadines such as Chatham Bay, Bequia land (Spring and St. Hillaire), Mt. Wynne-Peter’s Hope, and Young Island.  These middlemen/women, adventurers, and seekers-of-profits invariably tell tall tales, ostensibly and pretentiously, purportedly on behalf of the People’s Republic of China government.”

He said that in practical terms, any break by SVG of diplomatic relations with Taiwan would be quite costly to SVG.

“Political parties in the Caribbean must be careful not to make their country’s foreign policies prisoners of adventurers or seekers-of-profit,” Gonsalves said.

The government of Taiwan has said that it will open fresh talks with the NDP after it announced the change in its foreign policy.