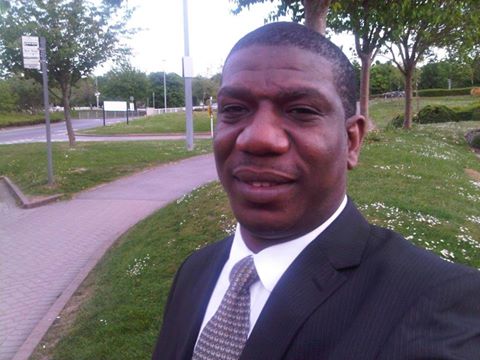 The main opposition New Democratic Party’s South Central Windward constituency division Thursday night selected 44-year-old lawyer, Israel Bruce, as their choice of candidate for the next election in that district.

Bruce won in a landslide against British Virgin Island-based communications professional, Sean Rose, who participated in the candidate selection electronically.

Bruce captured all of the 29 votes cast by the 36-member division — seven members of which were absent, chair of the division, Godson France told iWitness News on Friday.

He said two of the members are based in the Grenadines and were unable to attend, two were ill and two did not give any reasons for their absence.

France told iWitness News that he thinks that the fact that Rose was not at the meeting in the person affected his chances.

“I think so. I think a lot. People expressed that in 2005, they had a similar situation with Mr. [Brereton] Horne and then he left and he didn’t return to them, as promised, so they are not taking the chance.”

Horne, a U.K. based lawyer, returned to his adopted homeland after running and losing in South Central Windward on an NDP ticket in the 2005 general elections.

France said that Rose addressed the meeting electronically, during which he spoke about his vision for the constituency.

He said the next step is that Bruce’s name will be submitted to the central executive of the NDP, who would determine if there are any reasons why Bruce should not become the candidate.

Rose told iWitness News earlier this week that he was unable to return to St. Vincent for the constituency selection because of family commitments.

The meeting was initially scheduled for Sept. 1, but was postponed because of inclement weather, France told iWitness News.

Rose, was also not in St. Vincent for that date. He told iWitness News on Friday: “I congratulated Mr. Israel Bruce last night, and I wish him and the party all the best going forward”.

Meanwhile, Bruce, speaking to iWitness News on Friday, said he is “humbled” by the support he received.

“I did feel that at one particular point victory was certain but the margin of the victory was not anticipated by me for sure,” he said.

He noted that the NDP’s constitution provides that if there is “anything of any immaculate nature that the central executive of the party thinks that even if selected at the constituency level renders that person a detriment to the organisation and the chances at the polls, then the constitution still permits the Central Executive to overturn that decision and ask the division to relook candidate selection”.

Bruce, however, said he does not know of any reason why that could be the case with him.

“Once the central executive endorses the submission of the chairman of the division, then the candidate issue would have been finally laid to rest and it means that one has to set out to do the work that has to be done in preparation for the pending polls.”

South Central Windward is represented in Parliament by Minister of Agriculture, Saboto Caesar, who is also a lawyer and into a second term as MP for that constituency.

Bruce said he feels confident about his chances in South Central Leeward.

He said he and Caesar share mutual respect. “We have a good relationship and he must recognise that he is going to have a different sort of challenge, if he is the candidate, by the way”.

Bruce said that there are other names that are being mentioned as potential ULP candidates in the constituency for the next election.

“I’ll watch and see how it goes and I will design whatever campaign plan and strategy for implementation dependent on who the candidate is, quite naturally. I think I have pretty good chances. The reflection of the voting outcome at the constituency level is pretty indicative to me and it is a pretty loud and sound message. There were 29 votes cast and I got all 29.

“What that says is that there is unison, absolute unison, across the entire constituency as to who they are prepared to work with as the candidate for the party. And that, to me, is a source of comfort that we will have a relatively smooth running machine in preparation for the contest against whomever the Unity Labour Party puts into the mix.”

Bruce said that he assumes that the fact that Rose was not at the selection in person may have impacted his chances. “It’s one thing to be able to send a message via a recording to the prospective voters and another thing to be there in flesh and blood,” Bruce told iWitness News.

“That is critical to the process. Persons can feel the touch; they can feel the sense of connection with you as opposed to someone who speaks to them from a distant land over an electronic device.

“I really had hope that brother Rose [would have] come home … and presented himself in person,” Bruce said.

“I think that it may have affected him and I heard some sentiments — that perception of the absentee landlord may have hovered over people’s heads and minds and, accordingly, may have influenced some persons. Who knows? I am sure that if he were here, the results might have been al little different. Not that I think that I would have lost, but I think the results of the actual votes cast might have been a little different.”

Bruce holds a degree in law from the University of Wolverhampton in the United Kingstown.

He is a former public relations officer of the NDP, who opted out — midway — of contentious candidate selection process in 2005.

Back then, Horne defeated Bruce at the constituency division but did not amass the requisite 75 per cent of the votes. However, at the central executive run-off, Bruce garnered more votes than Horne, but was asked and agreed to withdraw from the race because he did not defeat Horne at the constituency level.

Former teacher Addison “Bash” Thomas represented the NDP in South Central Windward in the 2010 and 2015 general elections but lost both times to Caesar.