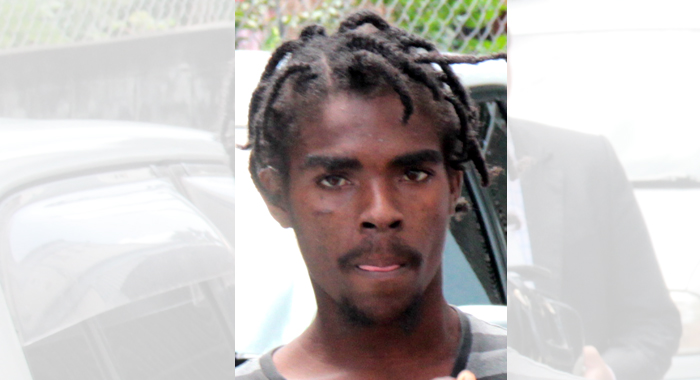 Brenston Antoine, 19, will spend four and a half years in jail for gun and ammunition possession. (IWN photo)

A 19-year-old resident of Langley Park, Georgetown was on Monday jailed for four and a half years for possession of a firearm and ammunition without a licence.

In handing down the sentence on Brenston Antoine at the Serious Offences Court in Kingstown, Chief Magistrate Rechanne Browne-Matthias told the youth that she was giving him a term of imprisonment that reflects the seriousness of the offence.

She, however, said that given Antoine’s age, he will still have an opportunity for rehabilitation.

The court heard that on Saturday, Sept. 10, a party of officers from the Rapid Response Unit executed a search warrant on the house in Langley Park where Antoine lives.

A search of the stocking revealed one 9mm Smith and Wesson automatic pistol, serial number K8B3744, loaded with three rounds of 9mm ammunition.

The court heard that when McDowald cautioned the defendant, he responded, “Officer, I find it in a black plastic bag and thought it was weed (marijuana).”

Antoine was arrested and taken to the Criminal Investigations Department in Kingstown.

A police ballistics expert test fired the weapon in his presence and found it to be in good working condition and all the ammunition to be live.

The defendant, who said he is a cocoa farmer, told the court that he had found the firearm the same night that the police searched his house.

He said he had intended to hand it into the police, but had gone home and had fallen asleep.

The magistrate, however, noted that Antoine has “a record that shows a propensity to deal with objects of an offensive nature,” adding that based on his record, it is highly unlikely that his story is true.

“It is a highly improbable; not a plausible, credible explanation in light of your previous convictions,” the magistrate commented…

“These offences will attract a custodial sentence,” she said, adding that she will take into consideration the defendant’s relative youth.

She said that in light of his age, he will still have enough of his youthful years to pull himself together despite a stint at Her Majesty’s Prison.

Browne-Matthias noted that Antoine had a loaded firearm, adding that a police officer could have been hurt while executing the search.

The magistrate said she is mindful to prevent any unnecessary gun violence, adding that the sentence must serve to deter anyone with any such an intention.

She told the defendant that he had so many options when he found the gun, as claimed.

During the sentencing, Prosecutor Adolphus Delplesche asked Antoine if it was true that he had told police he has a shotgun for when he is released from prison.

The accused youth denied having said this.