Trinis jailed for attempting to export weed from St. Vincent 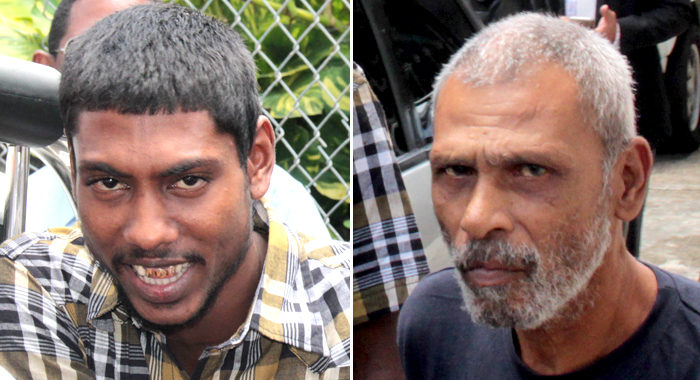 Two Trinidadians were on Monday fined and jailed on three drug charges at the Serious Offences Court in Kingstown.

However, even if they pay the fine, they will not be returning home for the next six months.

The men were jailed for six months on an attempting to export marijuana charge, and for three months on a drug trafficking charge.

Beharry and Ramroop, along with their fellow countryman, Jaffet Williams, 22, were jointly charged that between Aug. 15 and 23 at Chatham Bay, Union Island, they did agree “that a course conduct shall be pursued which, if the agreement was carried out in accordance with their intention, will necessarily amount to or involve the commission of the offence of drug trafficking, contrary to Section 310(1) of the Criminal Code”.

They were each charged that on Aug. 23 they attempted to export a controlled drug, to with 9,988 grams (22 pounds) of cannabis, an offence contrary to section 20 of the Drug Prevention of Misuse Act.

The men were also charged that they had in his possession a controlled drug, to wit 9,988 gram of cannabis, for the purpose of drug trafficking, contrary to section 16(1) of the Drug Prevention of Misuse Act.

A fourth charge was that on Aug. 23, they had in their possession a controlled drug, to wit 9,988 gram of cannabis with intent to supply it to another, contrary to section 7(3) of the Drug Prevention of Misuse Act.

All three men pleaded guilty to two immigration charges last Friday, namely, entering St. Vincent and the Grenadines by boat on Aug. 23. 2016, and disembarking without the consent of an immigration officer; and, being prohibited immigrants, entered the state without a passport.

Also on Friday, all three defendants pleaded not guilty to the conspiracy charge, which was subsequently withdrawn.

The prosecution also withdrew the drug charges against Williams — who had pleaded not guilty.

In making his submission during the sentencing hearing for Beharry and Ramroop before Chief Magistrate Rechanne Browne-Matthias at the Serious Offences Court on Monday, defence counsel Grant Connell said that he had been researching the approach of neighbouring countries to the sentencing drug offenders who are non-nationals.

Connell told the court that four Canadians were earlier this year fined and deported for attempting to import marijuana into Barbados.

He said the cannabis produced in Canada seems to be the new craze as it is more potent and fetches “10 times the price”.

“They were all fined and deported. All four Canadians smuggling cannabis into Barbados,” Connell emphasised.

The lawyer further noted the cases of Vincentians who were recently fined for smuggling liquid cocaine into Barbados.

“We have to take off the blinkers to reality,” he said of the state’s attitude to marijuana.

“It is grown locally and the laws of the lands must not be lost to the reality of the laws of economics,” he said.

Connell said that the nation is engaged in a war against marijuana that it cannot win.

Send them back to Trinidad. Take away their money,” Connell urged the court regarding sentencing of the two Trinidadians.

“Jailing foreigners will never stop the ganja-growing” he further said.

In her response, Browne-Matthias said that considering the defence’s submission and the guidance of the Eastern Caribbean Supreme Court, a fine was in order for the possession of marijuana charge.

She ordered the defendants to pay the court EC$13,000 or spent 12 months in prison.

She, however, sentenced them to three months in prison on the drug trafficking charged and six months on the charge of attempting to export the drug.