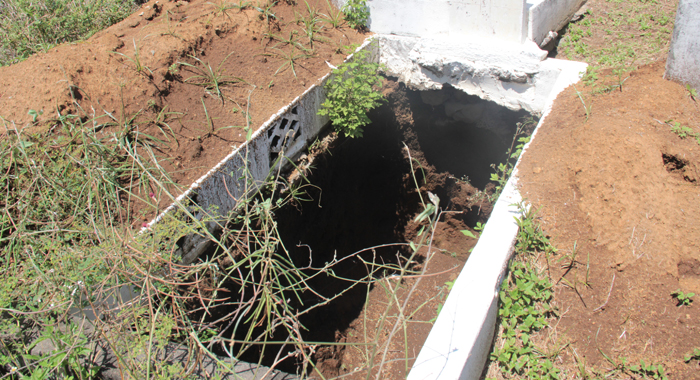 The full length of this grave was excavated to a depth of about four feet. (IWN photo)

(Scroll for video) The two graves that were dug up at the Catholic Church’s cemetery in Mt Grennan, were desecrated by a man who is said to have a mental health issue, a resident of the community told reporters on Thursday.

The two graves that were dug up at the Catholic Church’s cemetery in Mt Grennan, were desecrated by a man who is said to have a mental health issue, a resident of the community told reporters on Thursday.

The desecration of the graves has generated much discussion since it became public this week.

But a resident of the community, who asked not to be identified in this story, told reporters at the site that the incident occurred sometime in August and was reported to the person who usually digs graves at the cemetery then.

When iWitness News visited the cemetery on Thursday, the earth in both graves, which were surrounded by concrete tombs, had been removed to a depth of about three and four feet.

The excavation of the grave that went down about four feet was more extensive than the other one.

It was not clear if the human remains in any of the graves were disturbed.

It is also not clear who were buried in the tombs, as there was no standing headstone on one of the graves, while at the other, where there was a headstone, there was no inscription to identify the deceased.

While we were at the site, a man approached reporters and said that he knows who had desecrated the tombs and said he would share the information on condition that the source be not identified.

He told reporters that he was in the area sometime in August when he saw a resident of Mt Grennan who he said is pretending to be crazy, passed by with a pick-hoe, a shovel and a spade in his hands and a crocus bag on his back.

The source said that some time later, he saw the man in the cemetery and he shouted to the man, asking what he was doing in the burial ground.

The source said the man then left with the crocus bag on his back.

The source said he reported the desecration to the caretaker of the cemetery, who, he said, told him he had reported it to the police.

A pick handle and a shovel, without its handle, were seen lying near to one of the graves on Thursday.

iWitness News was unsuccessful in its attempts on Thursday to locate the caretaker of the cemetery.

The inscription on a monument near to one of the desecrated graves was faded but said it was “erected on the Feast of All Souls 1966 in honour of our beloved dead.

The cross, which formed part of the monument, was inscribed with the words, “May they rest in peace.”

A headstone was erected at one of the desecrated graves, but its inscription seems to have faded with time.

The cemetery is located in an area called Cooly Hill, some distance from the main road. It is owned by the Catholic Church and is used to bury members of the Catholic congregation in the area.