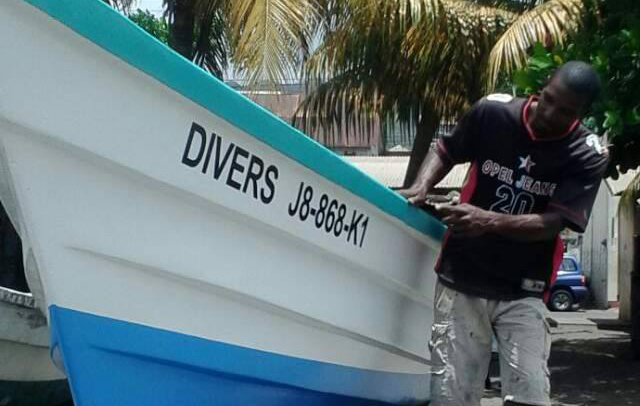 James Baptiste, a crew member, and the missing boat.

The co-owner of a Vincentian fishing boat that has not returned to port almost two days after setting out to sea, says he is hoping for the best for the three-man crew as a severe weather system is expected to begin affecting St. Vincent and the Grenadines Tuesday night.

The weather system is expected to generate swells of 4 to 5 meters (12 to 15 feet) in open water, forecasters said at 5 p.m. Monday.

The three men — captain Andrew “Dougee” Baptiste, 54, of Rose Place, Kingstown and crew members James “Bow” Baptiste, 35, of New Chapmans Village, Georgetown, and his townsman, Lesworth “Gargan” Young, 31, also known as Schemron Young — have not been seen or heard from since setting out to sea from Kingstown around 7 a.m. Monday.

“I am still being optimistic. I am not having any doubts. I really don’t want to have any doubts. I am still keeping my fingers crossed,” Lorenzo James, who is co-owner of the boat — a 25-foot fiberglass pirogue, iWitness News Tuesday night.

The boat call code is “J8-868-KI” and carried the name Divers, but is not equipped with radio equipment, James said. It is painted white and blue on the outside and green on the inside.

He said the men normally return to port by 7 p.m.

He said that when they left Kingstown on Tuesday, they indicated that they were going to one of the fishing ground southwest of St. Vincent.

James said that the men had 65 gallons of gasoline on board. Their only communication equipment, however, were their cell phones, he said.

He said the crew, which does not have a GPS navigator, normally fish 40 to 45 miles out to sea.

James told iWitness News that the men usually take along at least one day’s supply of food and water whenever they go out to sea.

But he was mindful that a tropical wave was expected to begin affecting the country Tuesday night.

“I can’t even explain how I feel,” James said.

He told iWitness News that a report has been lodged with the Coast Guard, which said it will activate the relevant protocols.

The 5 p.m. weather update from the SVG Meteorological Service said that a strong tropical wave is about 470 statute miles (530 km) to the east of St. Vincent and the Grenadines.

The system continues to track west to west-northwest at about 15 to miles per hour or 24 to 32 kilometres per hour and is still showing signs of becoming better organised with most of the deep convection remaining to the north of the broad centre.

A Hurricane Hunter aircraft investigated the system Tuesday afternoon and was not able to find a closed surface circulation.

However, environmental conditions remain conducive for continued gradual development over the next 12 to 24 hours, and a tropical depression/tropical storm could form at any time during the course of Tuesday night or early Wednesday.

Regardless of tropical cyclone development, pockets of moderate to heavy showers, periods of rain, thunderstorms, and winds gusting to storm force are likely to spread across the island late Tuesday night into Wednesday.