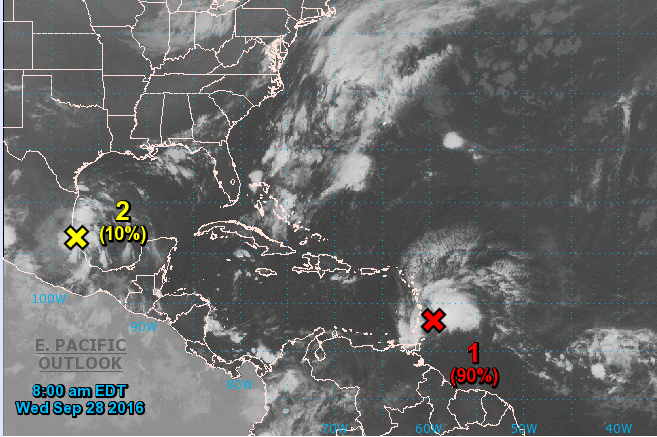 Forecasters in St. Vincent and the Grenadines said at 7 a.m. Wednesday morning that the system that they have been monitoring over the past few days remained a tropical disturbance although it continued to show signs of gradual development overnight night.

“A reconnaissance aircraft will investigate the system again this morning, and it could be upgraded to a tropical depression or tropical storm at that time,” the National Emergency Management Organisation (NEMO) said in a statement issued at 7 a.m.

The system has been affecting St. Vincent and the Grenadines throughout the course of Tuesday night with showers and widely scattered thunderstorms. Conditions are expected to further deteriorate during Wednesday morning, with some pockets of moderate to heavy showers, periods of rain, thunderstorms and gusty winds.

Once the centre of the system passes the island during the mid-morning, sustained wind speeds 25 to 35 mph/ 45 to 55km/h with higher gusts, are expected to spread across the island.

Rainfall accumulations of 3 to 4 inches (75 to 100 millimeters) are still possible, with sea swells of 3 to 4 meters (10 to 13 feet) in open water. A warning for small craft and sea bathers will remain effect.

Residents in St. Vincent and the Grenadines should continue to monitor the progress of this system, NEMO emphasized, adding that the SVG Meteorological Services will continue to provide the necessary updates.

Meanwhile, the US Hurricane Centre said Wednesday morning that reports from an Air Force Reserve reconnaissance aircraft indicate that the strong tropical wave located near Barbados is producing winds of 40 to 45 mph. Regardless of whether or not the system becomes a tropical storm before it moves through the Lesser Antilles, tropical-storm-force winds and heavy rains will spread across Guadeloupe, Dominica, Martinique, and St. Lucia today.

Satellite and surface observations suggest that the circulation associated with the system has become better defined, and the reconnaissance aircraft is beginning its mission to determine if a tropical storm has formed.

The system is moving westward to west-northwestward at around 15 mph, and is expected to pass over the Lesser Antilles later today, and move over the southeastern Caribbean Sea tonight and Thursday.