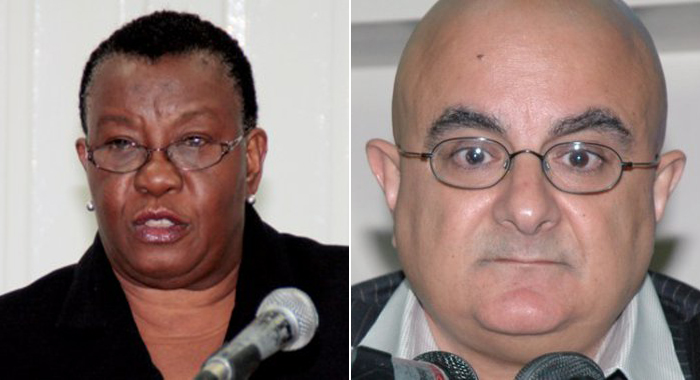 Leader of the Opposition, Arnhim Eustace is making another call for Sylvia Findlay-Scrubb to resign as Supervisor of Elections or for Prime Minister Ralph Gonsalves to relieve her of the post.

Eustace’s latest call on Monday came in light of comments that Dominican senior counsel, Anthony Astaphan — who is representing Findlay in election petitions brought by the opposition — made on radio last week.

Speaking on Boom FM on Friday, Astaphan said there is a number at the back of ballot in St. Vincent and the Grenadines that can be used to determine how someone voted.

He said on Monday that he was wrong, and there is no such number.

But Eustace, speaking at a New Democratic Party (NDP) press conference on Monday, noted that not only is Astaphan Findlay’s lead lawyer in the election petitions brought by the NDP, he also represented the elections chief in an application brought by the NDP’s Ben Exeter, asking the court to allow him to inspect the very election ballots and counterfoils.

In presenting the context for his call, Eustace noted that in the Searchlight newspaper of Dec. 15, 2015, just six days after the general elections, Findlay-Scrubb asserted her office’s commitment to free, fair and transparent elections.

“She further stated indignantly that ‘when all the facts are known, it will be evident that the allegations which are now being made are based on misinformation and half-truths and untruths’,” Eustace said.

Two days later, Exeter, who represented the NDP in Central Leeward in the December polls, filed an application to inspect the ballots and counterfoils used in the election.

Eustace noted that while Findlay-Scrubb had described the elections as transparent, “she opposed the application ‘tooth and nail’.

“If the election was free, fair and transparent, what was the harm in showing that? That was her first inconsistency in the post-election period,” said Eustace, whose NDP is challenging, in court, the results of the elections in Central Leeward and North Windward.

Eustace further noted that Findlay-Scrubb, in an affidavit sworn on Dec. 21 and especially her subordinates, Winston Gaymes and Clyde Robinson in their own affidavits, claimed that Exeter and one NDP lawyer at the final count in Layou lied when alleging improper sealing of ballot boxes and mutilation of ballots, among other irregularities.

“Yet in its May 2016 final report on the December 9th general elections, the Organization of American States Observer Mission corroborated the account given by Mr. Exeter and his lawyer at the final count. That was the Supervisor’s second major inconsistency,” Eustace told reporters and media audiences.

“Among other things, the judge stated that it would be possible to tell how each person voted if the ballots and counterfoils were inspected. Public confusion ensued and the judge’s statement became the subject of radio call-in programmes and even an online video which went viral.

“Yet there was a deafening silence from the Supervisor of Elections on what was undeniably at variance with the Representation of the People’s Act,” Eustace said.

“It was not until iWitness News interviewed the Supervisor on the 12th January that the Supervisor spoke on the issue. And even then she refused to calm voters’ fears and alarm at the suggestion that their ballots were not secret. She refused to say that the ballots in the 2015 general election she supervised were designed and printed in accordance with law and therefore individual voters’ choices could not be known. She failed to defend the secrecy of the ballot following the judgment. The Americans would call that strike 3,” Eustace said.

The opposition leader further noted that to arrive at his Dec. 28 decision, Justice Cottle relied on, among other things, the sworn affidavit of the Supervisor of Elections.

“Imagine then the shock that ensued when the Supervisor wrote to her lawyers two weeks after the judgment seeking to change her said affidavit. In particular, she wanted to change aspects of her sworn evidence about the ballots. That would be strike 4,” Eustace said.

He said that now, last Friday, her lawyer who represented her in that inspection application and in these petitions “tells the nation that, in fact, each ballot bears a number which corresponds with the number on the counterfoil, which would therefore mean once more that the there is no secrecy of the ballot, that the ballots were not designed and printed in compliance with law and therefore that the supervisor broke the law and made a sham of the elections! Strike 5!

“Her lawyer made those comments early Friday morning and three days later the Supervisor of Elections of this country is once again silent. How many is that? Strike 6!” Eustace said.

Amidst what he said were Findlay-Scrubb’s “failures regarding the ballots”, Eustace said he was yet to receive a response to his letter to her requesting the list of transfers into constituencies since the December elections.

“By her intermittent silence, her inconsistencies, her acts and omissions about the secrecy of the ballot, the composition of the ballots, the procedure employed by electoral officers at the election and the counts, her general conduct of the December 2015 general elections, the Supervisor of Elections has been complicit in the violation of election law and spearheaded a travesty of a general election,” Eustace said.

“By that silence, and by those inconsistencies, Mrs. Findlay-Scrubb is contributing to an atmosphere of fear and alarm among the entire electorate, and especially among those who vote against the ULP, that they vote at risk of being discovered. Her alternating inconsistencies and silence have created nationwide alarm and concern about the integrity of the electoral system. One need look no further than the record-setting 288-day Frontline protest outside the office of the Supervisor of Elections to find public concern about her conduct of the elections,” Eustace further said.

He said the case he has presented points the nation to one logical imperative: having lost all credibility, the Supervisor of Elections, Mrs. Sylvia Findlay-Scrubb, must be removed from office immediately.

“The Supervisor must go! It has long been clear that Mrs. Findlay Scrubb ought to tender her resignation. If she refuses to do so, the Minister of National Security, Air and Sea Port Development, Dr. Ralph Gonsalves — under whose responsibility falls the electoral office — must remove her. After all, it was he who said you can go to any court but in the end you have to “come back to Papa”. In the expanding landscape of national failures, all roads indeed lead to Gonsalves,” Eustace said.