No ticky, No washy — Argyle-Style 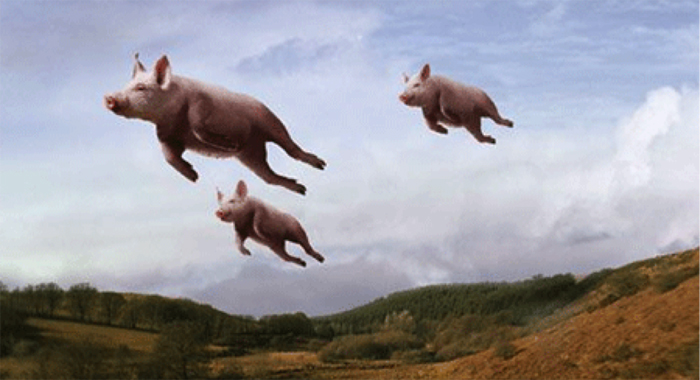 Pigs can fly but not to Argyle

There is an often repeated bit of racist humour about the owner of a Chinese laundry who told a customer who came to pick up his laundry but could not produce his claim stub, “No ticky, no washy” meaning that, “If you don’t have a ticket then I’m sorry but you’re more or less screwed.”

Customer: “Sorry, but I can’t find my ticket.”

Customer: “But I need my clothes.”

Customer: “But I don’t have anything else to wear.”

The truth behind this bit of ethnic foolishness is that American and Canadian Chinese immigrants, often conversing with their customers in broken English, and giving them tickets written in undecipherable Chinese characters, dominated the commercial laundry business from the mid-19th to the mid-20th century, after which time they were gradually displaced by washing machines, large centralized operations, and permanent press clothing.

“‘No ticky, no washy’ has since come to be used as a catch-phrase for an impasse in many conflicted transactions quite unrelated to the Chinese or laundries”.

There is no better way to express our present national impasse, the inability of the Dr. Ralph E. Gonsalves regime to get our cleaned laundry back — to make sure that Argyle International Airport (AIA) attracts enough international airlines and passengers to make its construction worthwhile — than to say it’s just another example of “no ticky, no washy.”

This is exactly how I view the Sept. 25 iWitness News headline

‘Great progress’ with 4 airlines as work on Argyle Airport ‘winding down’ which highlights many years of work trying to launder our airport by promoting international airline interest:

‘’’In so far as the airlines are concerned, international airlines, Glen Beache [Chief Executive Officer of the Tourism Authority] is heading the operations in that regard and he is reporting to me and I can tell you we have made great progress with one, two, three, four airlines. There’s a fifth, which we are working with. LIAT has come in and looked at the operations and also Caribbean Airlines,’ Gonsalves said [at a town hall meeting with Vincentians on Saturday] in New York.

He said that the team headed by Beache is in conversation with the international airlines.

‘We have had visits from a couple of them. LIAT was here; they visited the airport because LIAT has to move pretty soon its operations from Arnos Vale to Argyle’”.

But isn’t this the same Glen Beache who early this year said:

“It’s [AIA] very close to opening. And I know one of the big questions is simply which airlines will be flying into St Vincent and the Grenadines…. We are not going to know exactly which airlines are flying into St Vincent and the Grenadines until the airport is completed, and until a CEO has been put in position at AIA…. The airlines will have to speak to whoever the CEO is, because all sorts of things are coming into these discussions — in terms of landing fees, turn rate, depending on how many times they’re coming per week… a lot of things…. Once a chief executive is appointed to the AIA, representatives from the various interested airlines will visit SVG for further negotiations” (Searchlight newspaper, Friday, January 22, pp. 1, 13).

As I have already argued in response to the story:

“If a CEO must be in place for serious negotiations to commence, what has been the point of all the years of previous “negotiations” — if this is what they actually were rather than one informal and pointless meet-and-greet after the other — with these and other airlines? After all, the Prime Minister was hell bent on building the airport whatever the obstacles, real or imagined, based on a politically useful fairytale premise that, “If you build it, they will come”.

If an airport CEO is so necessary to facilitate airline bargaining, what do we make of the Prime Minister’s remarks two years ago that, “… it is expected that some of the international airlines will enter into service agreements in 2014 with the Government to operate out of the Argyle International Airport”, a statement made long before any search for an airport Chief Executive Officer.

And if a CEO were actually needed, what do we make of a similar comment in the Prime Minister’s January 2015 Budget Address that several (unnamed) airlines have expressed such a strong interest in adding SVG to their routes that, “Air service agreements are expected in the first half of 2015 with several of them?”

Sometime around May this year an American CEO with lots of airport management experience was indeed hired. For some strange reason — the excuse given was health issues — he mysteriously resigned only six weeks later. No replacement has been named.

In explaining this resignation and related matters, Garth Saunders, beleaguered chair of the Board of Directors managing AIA actually admitted in the same report that the airport:

As we all sadly know from our own day-to-day interaction with those around us, being committed often proves one-sided when the supposedly devoted partner offers only false promises — the best example being husbands “butting” their wives or vice versa — an observation that gets us back to “no ticky, no washy.”

So now we have Glen Beache once again doing what he said he couldn’t do: negotiating with international airlines, only two of which are named — LIAT (whose presence at Argyle would do nothing to increase flights or passenger numbers while doing a great deal to drive already exorbitant fares through the roof to pay the much higher “airport improvement fees” at Argyle) and Caribbean Airlines (which would never fly here non-stop because their only uninterrupted flights from North America — there are no longer any from the United Kingdom –are to Jamaica, Trinidad, and Guyana .

As for the other nameless airlines, the PM says, “… we have made great progress with one, two, three, four airlines. There’s a fifth, which we are working with.”

All Dr. Gonsalves forget to add is that pigs can fly and the moon is made out of cheese.

After a while, prevarication and deceit catch up with you or, better still, catch you up.

Which brings me to the heart of “no ticky, no washy.”

So who is implying this phrase? Certainly not the citizens of our country, the actual owners of what will soon be a worthless billion-dollar ticket that will suffocate us with a heap of filthy clothes in the form of an unused and rusting airport.

Nor does it reflect the attitude of the regime itself trying to stick a finger to the electorate by saying, “For God’s sake, don’t blame us for this mess. After all, you were stupid enough to have voted for us so you screwed yourself!”

Some would say that this outcome would be either a catch-22 contradiction or a version of the “Which came first, the chicken or the egg?” dilemma.

It is neither. There is no contradiction and there is no dilemma. There are simply no players willing to gamble on a project – trying to get tens of thousands of tourists to go where none have gone before, our holiday-challenged island — that has no chance of success.

Not even flying pigs would try to land at Argyle.

This is the 34th in a series of essays on the folly of the proposed Argyle International Airport.

2 replies on “No ticky, No washy — Argyle-Style”