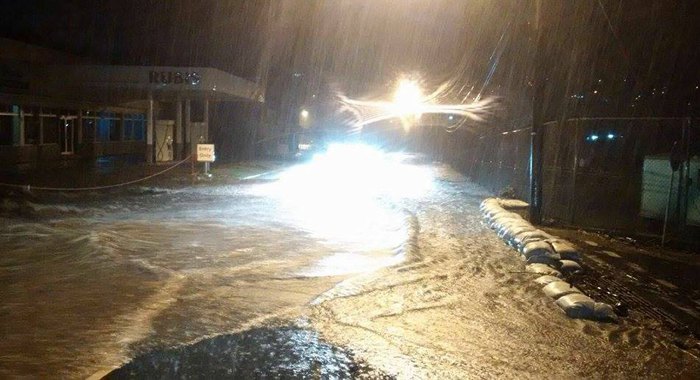 Prime Minister Ralph Gonsalves said late Wednesday night that his government will ensure that the relief effort after the passage of Tropical Storm Matthew goes well.

Gonsalves spoke by telephone on the state-owned National Broadcasting Corporation from Barbados, where he has been stuck since Tuesday as he tries to make it back to St. Vincent from meetings in the United States and Puerto Rico last week.

“I want to first of all express sympathy to the family in Layou — the young man who tragically lost his life. I have received unconfirmed reports of two other situations but I will wait until I get confirmation,” Gonsalves said.

Police have confirmed that a teenage boy died in the Central Leeward town of Layou but officials have not released any further details.

iWitness News has been reliably informed that the boy died when he was crushed by a boulder that came loose from a hillside hear his home as he was trying to make a path for water that was making its way into the house.

NEMO had said earlier on Wednesday that some 88 persons had moved into emergency shelters across St. Vincent and the Grenadines.

NEMO had said that shortly after 8 p.m. Tuesday, 32 female residents of the Lewis Punnett Home were relocated to the Fair Hall Government School.

Further, 50 persons had moved into the George Stephens Secondary School in Colonarie and three persons at the Pamenos Burke Government School.

And, Wednesday night, dozens of residents of Buccament Bay abandoned their homes which were once again flooded by the nearby river.

They moved into the NIS Golden Years Centre in Cane Grove and the Rillan Hill Community Centre, where they joined a handful of residents of that South Leeward village who had sought shelter there as a precautionary measure.

Regarding the persons in the shelters, Gonsalves said: “Please be assured that the government will be there for you and to make sure that the relief effort goes well with you and for you and to urge all citizens, all residents to listen to NEMO, listen to the acting Prime Minister, listen to all those who are in authority to see that everything goes well; look out for your family, be safe and secure. The elements of nature are upon us and we just have to be very careful.”

Gonsalves thanked the acting prime minister and the Cabinet, Forbes of NEMO, who is acting as director, the volunteers and radio stations for their efforts.

He said other governments and persons from around the region and elsewhere have already contacted him and are already offering support and solidarity.

“It’s a difficult time but we have been through difficult times before. And I just want to say let us continue to work together and I am praying, as I am sure that most Vincentians are praying, that this storm will past swiftly and that we would not have a lot more damage.”

Gonsalves said he has received the reports that rivers that have overflowed their banks, others are raging and of the problems with landslides, and damage to some homes.

“But, most of all, I am very sorry about the death of the young man in Layou, and, also, those who have suffered any physical damage, and for those who have suffered loss. My prayers are with you and be assured that this government is experienced in dealing with natural disasters. We have good systems in place and not every time everything would go like clockwork but the authorities are working in a focused manner and we will mobilise the necessary resources, as we have always done, not just for this relief period but for the period of recovery and reconstruction. I want to thank all those who have been involved in helping,” Gonsalves said.

Several hours before it was flooded Wednesday night, officials in Kingstown had announced that the E.T. Joshua Airport would remain closed on Thursday.

Gonsalves said that because the communication network has remained intact, he has been in contact with the relevant persons and agencies in SVG, including NEMO and the acting Commissioner of Police, Renald Hadaway.

“I have spoken to persons from across St. Vincent and the Grenadines, including in my constituency. I know we had a problem at South Rivers but that has been sorted out, I have been advised. I have been in touch with a very experienced school teacher and local leader in the area there, Ms Johnny, and I have been trying to keep on top of things,” he said.

Gonsalves said he has spoken to Prime Minister of Dominica, Roosevelt Skerrit, and it doesn’t appear that things are as bad there as they are in St. Vincent from the reports.

“Let’s keep our fingers crossed. With the rain continuously falling and when the soil gets water logged, you are going to have the prospect of more landslides and blockage of rivers and rivers overflowing their banks and so forth,” Gonsalves said.

“Persons who are particularly close to rivers have to be very careful. Persons who are on hillsides, which are threatened, they should get to the shelters. We can always rebuild houses you know. We can always take care of the damage but we have to make sure that lives are protected. And that’s very, very important at this stage.”

Gonsalves said he knows the difficulties of those who are in shelters, adding that it is never a good thing to be in a shelter.

“People would much rather be in their homes. But if you are in a shelter, just know that we are doing our best with you and you make the adjustments. Hopefully, you would not be there for any prolonged period of time, because usually, once the worse passes, most people will leave the shelters to get back to their home and their families. So we have to particularly look out for the elderly and the children because they are not as mobile. We must always remember that.