In Bahamas, some signs of recovery but… 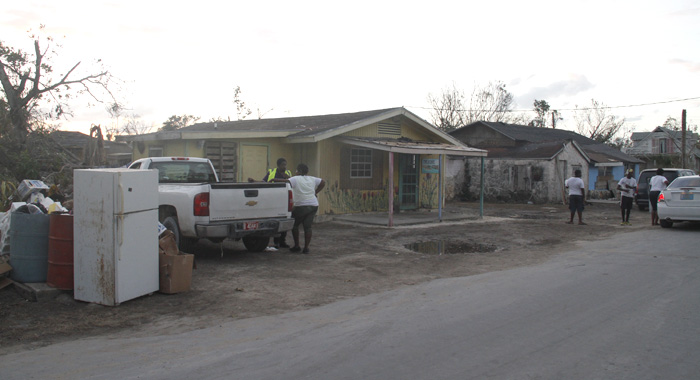 Some families had cleaned the debris and floodwaters from their homes. (Photo: CMC/IWN)

Prime Minister Perry Christie announced that relief supplies that are not assigned to the National Emergency Management Agency (NEMA) will be released to recipients after confirmation by NEMA.

He, however, warned that any abuse of the procedures would be subject to penalties under the country’s customs laws.

“We are going to encourage local vendors to be able to supply goods and have those goods offset in pricing on the basis that they must be duty-free in terms of sale to persons, be they government or private persons,” Christie said.

“But the exigency orders would cover building materials, furniture, furnishings, vehicles, and as we move forward, we have to take also into consideration other personal belongings that should be covered,” he said.

In New Providence Island, where the capital, Nassau, is located, 50 per cent of consumers were still without electricity Tuesday.

The Bahamas Power and Light Company (BPL) said it had substantially completed restoration in most of the Family Islands, with the exception of North and Central Andros.

In North and South Andros, some 80 per cent of the electricity infrastructure was damaged, with only 30 per cent of consumers reconnected to the grid on Tuesday.

The company said its greatest challenges include the amount of trees fallen on power lines and access points to its lines in some areas but said it will try to restore electricity in all areas by the end of the week.

There was minor to substantial damage to 80 per cent of the electricity infrastructure in North and South Andros. The company said it suspects that most consumers will be reconnected by the end of this week and warned that persons whose properties were damaged, especially by flooding, should have their properties examined by a licensed inspector before turning on the electricity.

BPL saw it was expecting assistance from international partners and at least three teams from the Caribbean Association of Electric Utilities (CARILEC) to arrive in the country on Wednesday.

Government schools in New Providence, Grand Bahamas, North Andros and the Berry Island will remain closed until further notice, while all other public school re-opened on Tuesday.

On Tuesday, residents of the affected areas were trying to put their lives together after the storm.

In North Andros, the most severely affected community, sisters Beulah Laing and Syntesh Walkes, were busy cleaning up their houses in their family compound on Swam Street, Nicholls Town on North Andros.

“In our area here, we were flooded inside the house. We had at least four feet of water inside the house. We lost all our furniture, our appliances, everything damaged by the salt water. When the sea came over into our yard, everything was flooded out. We had some roof damage,” Liang, an employee at the Department of Environmental Health Services told the Caribbean Media Corporation (CMC).

She said the roof of her brother’s house, located in the same compound, was torn off, leading to water damage to the house and its contents.

Laing and Walkes live in a compound that has been in their family for generations.

“I grew up here from a child,” Laing said, telling CMC she has “never ever” experienced a storm like Matthews in the community, which is located close to the sea.

“I don’t think Andros has every experience a hurricane like this,” she said, adding that she has only heard about the 1929 hurricane that devastated the island.

Walkes said that they have weathered previous storms just fine.

“You could have stayed in your houses and stuff, but this one, you had to evacuate because of the water,” said the woman who lost all her furniture and personal items when storm surged rushed into the house.

“You have to try to get your life back together after all of this,” she said, noting that electricity and water were only “partially” restored, explaining that she only had electricity in one room of her house and the water pressure was low.

The women were concerned about the impact of the storm on their teenage children.

“I know my kids are traumatised. They keep asking, ‘Mommy, are we staying here? Are we moving? Stuff like that,” said Liang, noting that her sister’s children were also terrified.

“Her son especially with the water because he said he had a dream about it – about the water coming into the house,” Liang said of her sister and nieces and nephews.

Walkes added: “I guess they are alright now because two days after the storm, we came back home.”

She said she has been talking to her children in an effort to help them to cope.

“They have to understand that this is part of life. This is not us; this is God’s intervention. This is not a manmade storm,” Walkes said, as Liang added, “There is nothing you can do to control it.”

The women said they were waiting for their relatives in Nassau to send food supplies, even as they said they did not know when the vessel — which sails on Thursdays but did not leave port in Nassau last week — will sail next.

Liang said she had been trying to get water from the police station.

“I guess that because I work for government; they would put me in the back but I still have my children that need water,” she said, laughing.

The sister and their families had on Monday evening cleaned up after the storm, deposing outside the compound a pile of debris, including a refrigerator destroyed by the hurricane.

Walkes said their lives were “far from back on track” with her sister adding “once we get power restored, get the kids back in school, I believe once the children get comfortable, more relaxed, then I will feel a little more relaxed on a personal level…

“We had mud in the house, you couldn’t see the while tiles where the mud was on the floor. It was terrible. It took me two days of mopping just to get the tiles white again.”

Tetrae, one of Liang’s children, said he weathered the hurricane at his grandparents’ house in another area of North Andros.

“The roof was coming up and some of the trees blowing down, hitting the house,” he told CMC of the “scary” experience.

Nigel Lafleur, a grade 12 student and athlete, said the experience was “fairly scary”.

“I wasn’t expecting it to be as monstrous as it was. It was terrifying — blowing down trees from the root; trees you would not think would fall, strong trees and watching the roofs fly off people’s houses and stuff like that.”

The student-athlete said he misses the trees on the island, many of which were uprooted during the storm.

“The island doesn’t feel the same anymore now that it is not green as it used to be. All the plants are dead,” he said, adding that getting electricity back would be “nice”.

Businesses in North Andros were also trying to get back on track after Matthew.

Among them was a snack food business in Lowe Sound that supplies local stores and high school between North and Central Andros with supplies and snacks for students.

On Monday, several people were outside the business place sorting numerous pallets of soft drinks salvaged from the floodwater that had inundated the store

“There was like nine feet of water. The store was very secure, … battened with plywood and all of that an after all the water went into the store, because of the pressure, it just forced all the doors and all the bars off the doors. Hence you have a lot of water damage,” said Vanda Rahming, who co-owns the business with her son.

She told CMC that she lost about 50 per cent of her stock but was yet to calculate the value in terms of dollars and cents.

“We are still working on that and as we go through, we are seeing a lot of damage. This still needs at least another week or a little over because what I have noticed is a lot of water damage and even as it relates to the electrical sockets and stuff, so I am certain it will be a while before those things can dry out that you can operate in the store,” she said when asked when she might begin trading again.