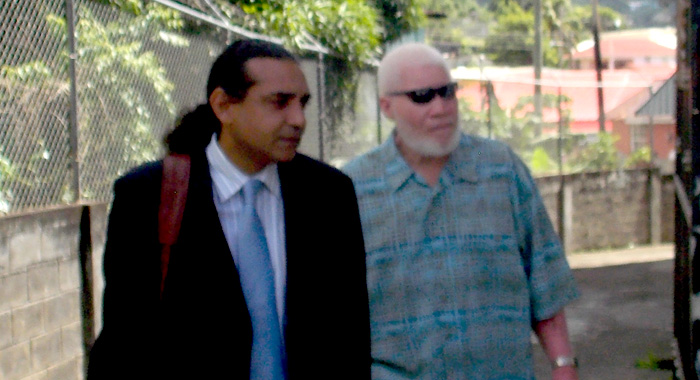 Chief Magistrate Rechanne Browne-Matthias imposed on Ragguette a fine of $1,000 on a charge that on Sept. 6, 2011, with intent to defraud the U.S. consular officer in Bridgetown Barbados, he falsely represented himself to be H.V. Prescott, a fictitious person. He was ordered to pay the fine by Nov. 10, 2016, or face 5 months in prison in default of payment.

The Chief Magistrate also imposed a fine of $1,000 on Ragguette on the charge that on Sept. 9, 2011, with intent to defraud the U.S. consular officer in Bridgetown, Barbados, he falsely represented himself to be Mavis E. Johnson, a fictitious person. He was ordered to pay the fine by Dec. 16 with an alternative prison sentence of five months if he defaults.

The CMBA chairman had pleaded guilty to the charges about three weeks ago, months after the charges were brought against him. The caution statement he gave to police was very incriminating.

According to the caution statement read in court yesterday by Assistant Superintendent of Police Clauston Francis, Ragguette’s initiation to the fraudulent activities started in the 1970s. He said he was a member of the trade union organisation called the St. Vincent Working Men’s Association and he had an association with the late trade unionist Duff Walker James who at that time was assisting persons with their applications for US visas. He said that James had asked him at one time to assist some people while he was travelling to Barbados.

Ragguette said that after James died in 1992, persons applying for visas approached him to assist them with their applications for visas and from 1992 to the time of his arrest he assisted over 300 persons in applying for their US visas.

ASP Francis said that Ragguette told him that he charged $250 on average to prepare the documents for the people applying for US visas. However, senior prosecutor Adolphus Delpesche told the Serious Offences Court that Ragguette charged between $400 and $800 to prepare each document.

Ragguette said he was not computer literate and persons assisted him in the fraudulent activities in the areas of stamping and signing the letters. He, however, refused to disclose their identities. He said they did not receive monetary rewards for their actions.

Ragguette told police that the name Mavis E. Johnson was fictitious. He also said the letterheads of the St Vincent Community College, Karib Kleen and other entities in effecting his fraud.

“I am the source of the fictitious documents,” Ragguette was quoted as saying in his statement to police.

During their investigations, detectives removed documents from the Board Room of the Carnival Development Committee and Ragguette’s home. According to ASP Francis, Ragguette said the CMBA, which he headed for years, had no office of its own.

Senior prosecutor Delpesche told the court that Ragguette set up a fictitious entity called Christian Benevolent Cooperative Credit Union Society Limited of which one Mavis E. Johnson was manager. He said that a large number of letters presented to the US embassy by applicants for visas caused much concern and the authorities in St Vincent and the Grenadines were contacted and investigations were carried out.

Presenting mitigating circumstances on behalf of his client, defense lawyer Ronald Marks said Ragguette, a former teacher and a founder of the National Youth Council, NYC, worked in the public service for seven years before going on to work in the credit union movement. He said that the lawyer who referred Ragguette to him “described him as having a heart of gold”.

Marks said Ragguette suffered from diabetes and hypertension and he had extreme problems with his eyes and that a visit to Cuba for medical attention was long overdue.

Marks asked the court not to impose any custodial sentence, but to consider financial penalties and a bond on his client as the offences before the court were “at the lower end” and his client had an “excellent record”, the fact that he had no previous convictions prior. Marks said Ragguette was a nation builder.

Delpesche said that the crimes were serious and consequences for Vincentians applying for US visas could be serious. He, however, said that given Ragguette’s age and other circumstances he would suggest financial penalties and suspended prison sentences.

“His good heartedness can affect others negatively,” Delpesche told the chief magistrate.

Delpesche further told the court that a strong message must be sent to the public so that any “wannabe” would think seriously before they engage in such fraud.

The chief magistrate said looked at Raguette’s circumstances but she could not ignore the facts of the crimes and the implications the fraud had for Vincentians applying for US visas. She said she was aware that such crimes carried serious consequences but she must take on board the fact that he stayed out of trouble in his earlier life.

One reply on “Ragguette fined, handed suspended sentences in US Embassy fraud cases”