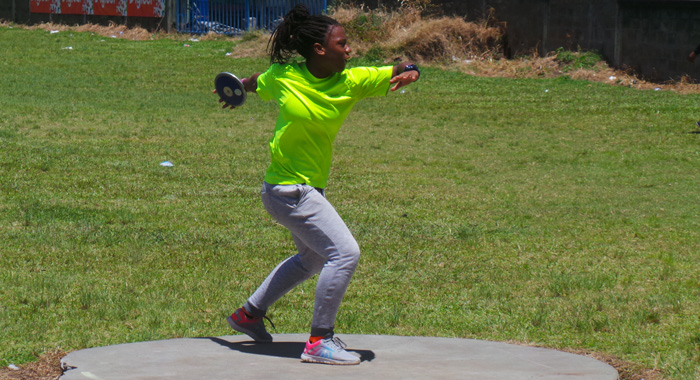 An athlete participates in the training programme.

Grenadian field events coach Paul Phillip says he is impressed with the available talent in field events in St. Vincent and the Grenadines.

Phillip was speaking to iWitness News after conducting a two-week training programme for field athletes in the areas of the shot put, javelin and discus events.

Phillip, who was a guest of Team Athletics St. Vincent and the Grenadines (TASVG), conducted sessions at a number of venues across the island during his period here.

This was the Grenadian’s second visit to SVG to work with athletes and coaches in field events after doing so two years ago back in February 2014.

This time, his programme included sessions with the Thomas Saunders Secondary, the St Vincent Grammar School, the Central Leeward Secondary, and Sandy Bay Secondary schools, as well as open sessions at the Grammar School Playing Field on Sept. 24 and 25.

“There is a lot of talent. There is a lot of talent and one of the things with St. Vincent and us in Grenada you are generally bigger people and to start off that is a plus and I think that it is all about harnessing [that talent] and I have seen the people who came to the programme made big strides in the period,” he said while overseeing the penultimate session at the Grammar School Playing Feld.

He cautioned, however, that if what he imparted is not built upon his visit would not have served any useful purpose, since he thinks that even with the basic some of those who attended the programme can excel in the not too distant future.

An official from TASVG said that following on from the programme the body will be seeking to have the necessary equipment at different locations across the island and do follow-up programmes with local coaches so as to continue the work of Phillip.

Speaking on the issue of identifying athletes who would be good prospects to take part in field events, he said that sometimes it is felt that the bulkier the person the better thrower they would be but according to him there is nothing further from the truth.

“It has more to do with technique than size and that is why when people looked at me when I competed they were puzzled with the length of my throws because looking at me to them it was nowhere did they see that type of strength in this frame,” Phillip said with a chuckle.

He said also that to become a good throws athlete requires some speed hence the reason why some second tier sprinters who will not make it to the top in track can do well with javelin, shot put and discus.

He said coaching is very technical area and therefore you’ve got to be able to make an assessment of who would be an ideal throws athlete.

“There some athletes who for instance may feel that they are sprinters and once you convinced them they may have a better future in the throws you will be surprised by the end results and I point you in the direction of Anderson Peters who is the third ranked Javelin thrower in the world in the Under 20 males… and that is quite an accomplishment for a guy who thought he was a sprinter”.

In addition to his world ranking, Peter is said to have won the most gold medals in a single event – the javelin, also at the annual Junior Carifta Games—and Phillip said that while the athlete is still one of the top sprinters in Grenada his focus is on the field events.

In the area of injuries Phillip said that while runners may suffer varying problems with the legs, throwers are commonly affected with groin strains from the turning and elbow, lower back and shoulder injuries from the actual throwing.

An IAAF Level three certified field coach, in addition to Peter, a 23-year coaching veteran, Phillip boasts an impressive haul of silverwares by those under his tutelage with Shamir Thomas, who has the most medals at Carifta by an individual and Keron Francis, who has four Carifta gold medals in the javelin and combined events.

The 2014 Carifta Games in Martinique saw Grenada under Phillip, collecting four field medals of the country’s six at the championships.

On the domestic front Phillip’s profile sent out by TASVG shows that he is the founder of the St. David’s Track Blazers in his native Grenada. And according to the information Track Blazers has won the Grenada National Championships for eight successive years of its 10 years of existence.

Also, Phillip has assisted the St. David’s Catholic Secondary School to 16 titles at the Intercollegiate Games in the Girls Division.

But while Phillip has made two trips to SVG assisting local field athletes’ questions are being asked as to the reason why TASVG has not seen it fit to use the services of this country’s most experienced and decorated field athlete, Genita Lewis.

Lewis, who represented SVG for a number of years in the javelin, shot putt and discuss at both contemporary and veterans, has made herself available to assist in those disciplines but has been mystifyingly ignored.

When asked a few months ago about her status, Lewis said then she was “ready and willing to work with young athletes whenever she is called upon”.