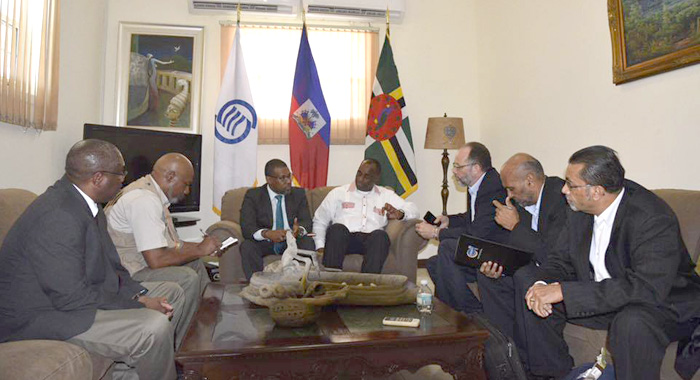 The Caribbean Community (CARICOM) will rally support for its member states, Haiti and the Bahamas, following the devastation caused by Hurricane Matthew.

This was presented during CARICOM’s high-level mission to both countries from Oct. 11-13.

The delegation, which was led by Chairman of the Conference of Heads of Government of the Caribbean Community, Prime Minister Roosevelt Skerrit and the Secretary General of CARICOM, Ambassador Irwin LaRoque, also included Ronald Jackson, executive director of the Caribbean Disaster Emergency Management Agency (CDEMA), Saboto Caesar, minister of agriculture, St. Vincent and the Grenadines and David Farrell, principal of the Caribbean Institute for Meteorology and Hydrology (CIMH).

Following meetings with the Governments of Haiti and the Bahamas, CARICOM has identified urgent matters for the recovery and rehabilitation efforts for the two member states.

“With over 300 schools damaged throughout the affected areas in Haiti, it is being recommended that the Community focus its intervention on adopting at a minimum, a school in Les Cayes and Jeremie and making a contribution to the rehabilitation to include a feeding programme for a maximum of two (2) weeks catering to the children from those two schools displaced as a result of Matthew,” Jackson said.

Given the devastating impacts to particular areas in the SUD (south) department, CARICOM also agreed that attention should be placed on providing support to the severely affected areas of Les Cayes and Jeremie. To this end, resources are being garnered from member states to provide the well-needed support to the worst affected population in these two areas for a maximum period of one month.

Specific support from the Community will also include providing emergency supplies such as water, protein, starch, tarpaulin and support for babies.

“The Community has also identified the lack of water supply as a major concern and will further explore among Member States and Community Institutions options for short-term interventions for providing potable water to the affected areas until water supply systems are brought back online,” Jackson said.

In the Bahamas, where the CDEMA Rapid Needs Assessment Teams (RNATs) were deployed between Oct. 9 and 12, several priorities were identified upon completion of their field mission. These range from short, medium to long term.

“The recommendations for the Caribbean Community support in The Bahamas are in the areas of rapid utility restoration, support for small farmers and fisherfolk and in early recovery assistance for lower income households,” Jackson said.

The National Emergency Operation Centre (NEOC) in Haiti latest damage and injury report as of Oct. 14 indicates the confirmed fatalities stand at 546, with 128 persons still missing and 439 injured.

Just over a week after the powerful Hurricane Matthew devastated the southern peninsula of Haiti, the extent of losses and damage is still being analysed in order to assess the needs.

The NEOC has begun the compilation of figures for the needs list and the preliminary needs identified throughout all the impacted areas include: water, tarpaulin, hygiene kits, water purification tablets, vector control, bleach and medicines.

Priorities for the government remain the distribution of water, food and drugs to people in temporary shelters and the adversely affected communities. The restoration of roads and communications are also a government priority.