School feeding programme could help fight NCDs in the C’bean 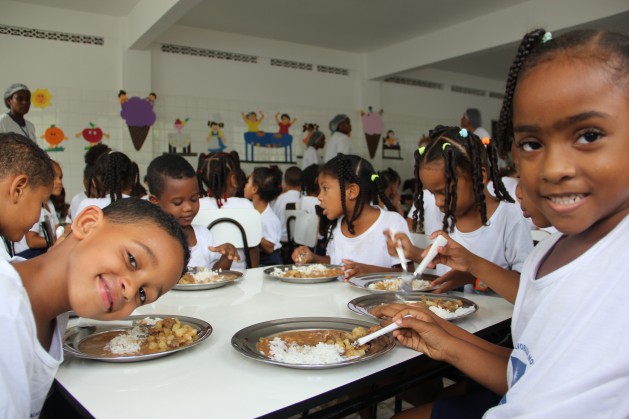 GEORGE TOWN, Grand Cayman — A food and nutrition official has identified the school feeding programme as a means of combating unhealthy eating habits in the Caribbean Community (CARICOM)

Lystra Fletcher-Paul, the Food and Agriculture Organization’s (FAO) sub-regional coordinator for the Caribbean, says that the initiative can be helpful in combating the serious problem of diet-related non-communicable diseases.

“… we see the school feeding programme as an important mechanism for inculcating healthy eating habits because there is a serious problem of obesity that leads to problems of health, non-communicable diseases. You have the problems with diabetes, strokes, all of this because of our unhealthy eating habits,” she told the media on Monday at the beginning of Caribbean Week of Agriculture (CWA) 2016.

This year’s CWA is being held under the theme “Investing in Food and Agriculture” and Fletcher-Paul said the FAO will hosts seminars on governance and public policy and the school feeding programme.

Another seminar will look at the link between trade and transportation in the regional agriculture sector.

“Transport has been determined as one of the key binding constraints to agriculture development in the Caribbean,” she told reporters.

She said during CWA 2016, there will be live demonstrations of chefs cooking with cassava flour and burgers made of lamb meat.

“So we are going to be showcasing some of the local stuff that can be done to substitute and reduce our high food import bill, because we are importing almost $5 billion in food cost every year,” she said.

Speaking at Monday’s briefing, Desiree Field-Ridley, CARICOM’s advisor, Single Market and Sectorial Programmes, said the theme of this year’s CWA is appropriate to the Cayman Islands, since its economy is based on financial services.

“We figured it is one way of bringing investment to agriculture,” she said and noted that tri-island British Overseas Territory is the first CARICOM associate to host CWA, which was first held in Trinidad and Tobago in 1999.

“Agriculture has been identified as one of the key drivers for achieving growth and development and employment, particularly in the context of the community’s 2015-2019 strategic plan,” Field-Ridley said.

She added: “And financing is one of the very key binding constraints to production and exports since the mid-1990s, but we have not succeeded to the extent we need to.”

And, Barton Clarke, executive director of the Caribbean Agricultural Research and Development Institute (CARDI), said CWA 2016 will look at key issues regarding investments in the agricultural sector.

“There are some specific discourses on coconuts, which we believe is the new frontier that we have to re-engage in in order to be able to contribute significantly to our food and nutrition security, our poverty eradication and hunger eradication, as well as climate change, because we understand that the climate has changed, the climate will continue to change and climate change mandates that we change and we have a responsibility to assist and to guide the farming community and the policymakers relative to meeting the challenges of climate change,” Clarke said.

This year’s CWA is being organised in collaboration with a number of other agencies, including the Technical Centre for Agricultural and Rural Cooperation (CTA), an agency of the African, Caribbean and Pacific (ACP) group of states-European Union.

“We will have a diverse workshop that will involve diverse stakeholders from the public, from academia, from international NGOs and well be looking at issues of production, market access, technology, ICTs, access to finance and we will be looking at the issues of performance,” Cheaz said.

He said CTA will also focus on agriculture and tourism and bring chefs as key players in the area of advancing agri-business.