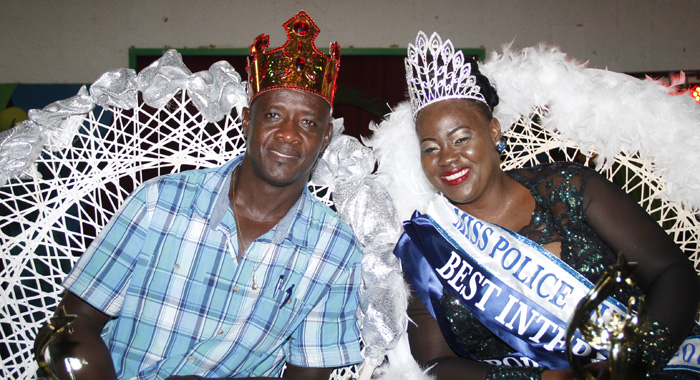 Competitors in the Miss Police Queen and Calypso Competition 2016 left patrons weak with laughter during the show at Russell’s Auditorium in Kingstown Friday night.

Detective Kemelia Boyd, who represented the Criminal Investigations Department (CID), remained dominant throughout the show and defeated seven other contenders, including a former model, to be crowned queen.

In the calypso segment, four bards, including one female, sang openly, and sometimes in codes, about happenings within the constabulary (“Ah just can’t see Mother Theresa heading IDC”), with promotion being the most common subject.

Corporal 9 Parnell Browne, who goes by the sobriquet “Master 9”, sang “Just Can’t See”, an original composition, and later a rewritten version of Poorsah’s “Bull Pestle” to win the calypso crown.

In the queen show segment, Boyd won all by one of the titles up for grabs.

She won the Sports Wear, Talent, and Interview Segment, while the Best Evening Wear title went to former model Melissa Davis of the Traffic Department, who was also first runner-up.

In the sportswear categories, Boyd, portrayed a West Indies cricketer and showed her skills with the bat in a “match” in which she faced “as nasty bouncer by Western Division” before playing a “magnificent six” against Central Police Station, which had set the “field” to avoid any singles, even as she needed just one run to win, according to the “commentary” at the show.

Boyd, 30, who has been a police officer for nine years, then showed her moves, dancing to Bravo’s “Champion”, much to the amazement of the packed hall.

In the talent segment of the show, Boyd depicted the abusive attitude of some members of the public to police officers who are investigating crimes.

Her piece, however, included some issues that police officers and other members of the public would like to have addressed: “Me nah go inna tha’ station dey. Central station ah ye stinkingest station. We hear rat ah run over yo’ like them ah go out fire and [bed] bug ah walk pon yo’ like them ah ha’ Commissioner Parade.”

She also addressed in a hilarious way the obesity among police officers, telling her colleague who had “arrested” her in the dramatisation: “Watch how yo’ fat and funny. Them nah ha’ uniform fuh fit you?”

In the interview segment, Boyd was asked: “You have been a police officer for the past nine years. Name two weakness you believe may be present in the Royal St. Vincent and the Grenadines Police Force and what can be done to improve on one of those weaknesses.

She responded: “Being a police officer for the past nine years, I have worked various departments and stations. Two of the weaknesses that I see in the Police Force are lack of motivation, where police officers who are working very hard are not getting enough motivation to continue to work hard. Secondly, the other of discipline, where senior police officers and even constables are friends and they are afraid to tell them when they are wrong.”

Boyd’s second question was: “A female police [officer] who works directly under your supervision complains to you that a male officer has made unwanted sexual advances towards her. How would you handle this situation?”

She responded: “First of all, there’s two sides to a story. I would listen to what that female officer is saying then I would call a meeting with the accused person and I would also hear his side of the story. After hearing both sides of [the] story, I would hold a meeting with both of them and from there, I would determine what measures to take.”

Davis’ winning gown was entitled “Goddess of the Sea”, a lavish gown designed by Clarissa Edwards and made by Carol Morgan-Velox.

In the calypso segment, in his song “Just Can’t See”, Master 9 sang about having only attained the rank of corporal after 26 years as a police officer even as “what is more shocking, how the big man madam get ASP” (Assistant Superintendent of Police).

“That’s out the window. It’s who you know. Those are the ones protecting you. Is how you relate, who marry who, who have children with Pam and Lou,” he sang, sending the crowd into a frenzy and president of the Police Welfare Association, detective Inspector Trevor Bailey, who is still recovering from a leg injury, on to the dance floor.

Charles was dressed in his former uniform but was not wearing the badge of the Royal St. Vincent and the Grenadines Police Force, which he served for more than three decades.

A placard on stage read, “Gold Teeth, CID miss you”, an apparent reference to former head of CID, retired ASP Sydney James, who, at the time of his retirement from the police force last year, was the nation’s best and most highly trained detective.

iWitness News was reliably informed that James was willing to continue as a police officer, but did not apply for an extension, reportedly after a senior national security official accused him of not being a supporter of the ruling Unity Labour Party.

In the second round of the competition, artistes were allowed to sing a popular calypso and were given the option of putting new lyrics to the song.

Master 9 did a hilarious remake of Cornelius “Poorsah” Williams’ “Bull Pestle”. Among those he gave lyrical blows was “Mr. Michael,” a reference to retired police chief Michael Charles and one “Sarah Palin”. (Listen below)

Friday’s show, the first of its kind since 2005, was organised by the Police Welfare Association.

Head of the association, detective Inspector Trevor Bailey, told patrons that Charles gave approval before his retirement a few months ago.

“Tonight, all of the planning and all of the hard work culminates and we hope that we will deliver a package that would be worthwhile spending your Friday evening with us,” Bailey told patrons at the beginning of the show.

“Have fun and let us all spend an evening together that after today when I sound the call sometime next year, you will respond in like manner.”

And Commissioner of Police, Renald Hadaway, noted that the show was last held in 2005 and added that the Police Force plans to make it a prominent feature on its calendar going forward.

“This is as a means to engender a better police and public relations, among other things,” the police chief said.

“Also, we want to seize the opportunity so that we can raise some funds to assist our members in time of need,” he said, adding that the show is also an opportunity to showcase the talent of police officers.