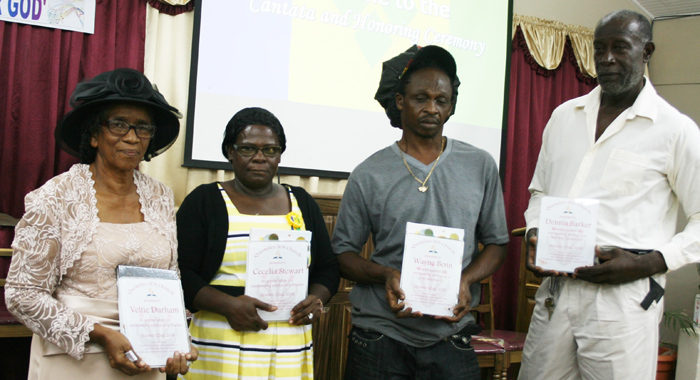 The Questelles Seventh Day Adventist church has honoured five outstanding residents of South Leeward for their contribution to the district.

cantata and honouring ceremony on Oct. 30.

While four of the awardees were present to accept their awards, Roa was given his in advance, as he had to leave the country before the event to be with his family overseas.

Chair of the proceedings, Mineva Glasgow, said that the honouring service was the 10th the church has organised.

“It’s really a pleasure for us as a church to honour the persons in the community. The church exists to help those in the community, share the gospel and also to give back,” Glasgow said.

Pastor Franklyn delivered a powerful message in which he spoke about King Nebuchadnezza’s capture of Israel. He said God wants his people to know that he is still in control, as he is the powerful and mighty God.

Franklyn told the gathering that the man that runs without God will be wary and fall down, but those who stand with God will be renewed in strength.

“But they that wait upon the Lord shall renew their strength; they shall mount up with wings as eagles; they shall run, and not be weary; and they shall walk, and not faint,” he said, quoting Isaiah 40:31.

Stewart was brought to tears as her nephew, Kimron Charles, read her citation. Charles told the audience that Stewart is a twin and came from a poor background. He said Stewart helped her mother, who was also a vendor, and she had her big break after she joined her brother and became his business partner.

Stewart is a mother of five and works as a vendor and businesswoman in Kingstown.

However, the most powerful moment that brought Stewart to tear was when Charles recounted how Stewart took care of him when his father passed away.

Benn, a Rillan Hill resident, is his mother’s only child. The father of one daughter has been in the auto mechanic industry for over 20 years. He started training with his uncle’s tools at his garage. Benn was given a scholarship to train in the field of auto mechanic because of his skills. He also serves as an instructor in St. Vincent and later travelled to Barbados to study auto body repair and later on gained qualification in welding, with reference being made to him as an outstanding performer. He operates a mechanic shop and many of the persons he has trained now have their own mechanic shops.

Barker, originally from the Questelles, started construction from a very tender age. He later migrated to Trinidad where he continued his trade. He then returned to St. Vincent where he trained many other persons in the field and executed some major project, including working on the Buccament Bay Resort.

He is a father of two and has over 30 years’ experience in the construction field.

Durham, honoured for her work in the field of education, was born in Lower Questelles but now resides in Campden Park. She is a former student of the Questelles Government School and the Bishop College, Kingstown. She began teaching from an early age as a student teacher. She later became a qualified teacher and serve at the Buccament Bay Secondary School, where she became deputy principal and acting principal before retirement.

Her teaching career spans 37 years. Durham is the mother of three children.

Durham delivered thank you remarks on behalf of the awardees.