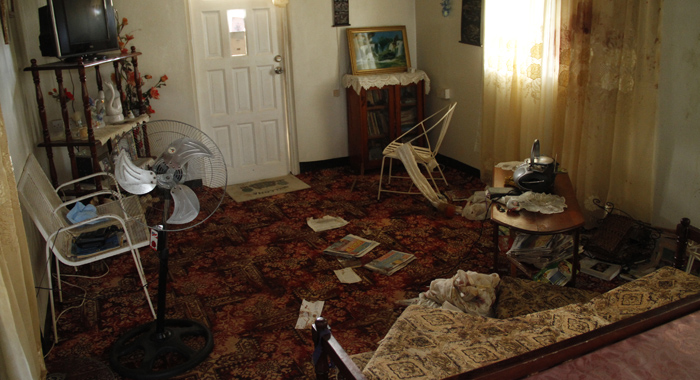 Pamela Willims’ blood-stained living room after her murder in her house Sunday night.

The sister of the retired nurse who was murdered in Kingstown Park Sunday night says he is battling memories of being unable to help her sister as she was being murdered.

Williams’ sister and next-door neighbour, Florence Glynn, raised the alarm about the attack on her sister, after a call from her sister’s telephone number came into her cell phone during the attack, sometime after 1 a.m. Monday.

Glynn, who, like her deceased sister, is from Bequia, told iWitness News on Wednesday, that she heard dogs barking to the west of the village sometime around 1 a.m.

She said she did not get up immediate, but did so after the dogs continued barking “viciously”.

Glynn told iWitness News that she thought it was not normal for the dogs to be barking like that so she peeped through a window, but did not see anything unusual.

“When I head back to my room, I heard a glass smashed,” Glynn said, adding that she wondered what it was.

“After that, my cellphone rang and when I looked at it, I see it was my sister. Her name came up on there. I tried answering it but I didn’t hear any reply on the other end,” said Glynn, who also told iWitness News that she did not hear anything on the other end.

She said she ran out the door and saw her sister at the window that faces the door of Glynn’s house.

“She (Williams) was by the curtain and like she had the phone in her hand still. But the window was closed. I couldn’t hear if she was saying something. But it was only she alone I saw at the time.”

Glynn said she took two steps backward to get a better view.

“So when I step backed two steps, I saw the guy behind her by the door,” Glynn said.

She then raised the alarm and went to call her neighbour, Randolph Lyttle, also known as Bobby Lyttle, who did not respond immediately.

Glynn said she then saw someone else that she knows and told him that Williams was being attacked in her house.

Meanwhile, Lyttle told iWitness News that he was in bed when he heard the dogs barking.

He said that sometime after, he heard the shattering of glass.

“Then after a while, the neighbour start to shout saying, ‘Bobby, somebody inside there killing my sister. Help! Help! Help!’”

Lyttle said that one of his cousins was just getting inside his vehicle and he turned back.

“He got a piece of pipe; I got a cutlass. The same time we got to the window, he (Baptiste) was trying to get out.

“So we hit him with the pipe and send him back inside and then I went in there and I wrestle up with him, get him under a kind of control after,” Lyttle told iWitness News.

“While I [was] holding him down, I had to call one of them because he was reaching for something — like something dropped out of his hand. So I had to really put in the muscles and pin him. So when the other guys came in, we try to pin him but he was still getting on. We had to do all that we had to do to try to put him down,” Lyttle recounted.

He said that even then, the attacker was still trying to get through the window.

“When we done and we get him under control, all he was talking he want water. Just water he talking about, and [that] he want some Aunty Marcie. He want aunty Marcie. We just had to do what we had to do; keep him there until the police came…

“All he saying he sorry,” Little said.

He said residents of the area asked Baptiste if he knew Williams and he said no.

“All he saying is Aunty Marcie. When we had him there, is water. Everything come out he mouth is water.”

Lyttle said he had never seen Baptiste in the area before, but other residents said they have seen him in the community selling coconut oil.

Meanwhile, Glynn said she is struggling to cope with the death of her sister and what she witnessed.

“I feel really cut up and thing because that same evening I was there with her until about minutes to 7 and then I left and went home. I left her in good health and everything like that…

“I was here watching her and I couldn’t help her. That is the part that keeps playing back in my mind all the time,” she told iWitness News.

It was noted that Baptiste is suspected to have killed three other persons that night.

“I don’t feel good about that at all,” Glynn said. “And I don’t think that my sister deserved to die like that.”

She said that after the residents had restrained Baptiste, she went into the house and called for her sister and heard no response.

“I did done know (knew) she was dead. So I rushed to the room where I know I saw her standing and when I went, I saw her lying on her right side with a [concrete] block on her face. He mashed up her face with a block. I don’t know where he got it from,” Glynn said, adding that her sister’s body also had stab wounds.

She speculated that the attack might have begun in her Williams’ living room, where she had a habit of relaxing.

Williams’ living room showed signs of a struggle, possibly the results of the attempts to restrain Baptiste.

But there is also a bloody sheet in the living room and the curtain at the window where the attacker is believed to have entered is also bloody.

One resident of the area who asked not to be identified in this article told iWitness News that Baptiste was hyperventilating after he was restrained.

“I can still remember the smell of him. He smelt like death,” the resident said.