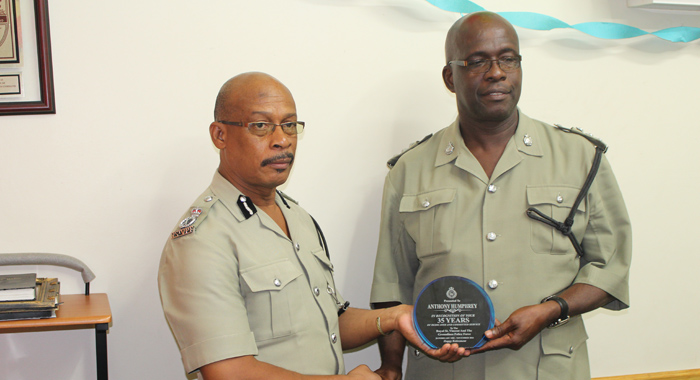 After gracing the “policing stage” for over 35 years, having served his country with distinction, Assistant Superintendent of Police, Anthony Humphrey, proudly departed the constabulary on Nov. 4, when he proceeded on pre-retirement leave which will expire on Dec. 14.

Humphrey hails from the rural yet, productive village of Greggs — a village which is undoubtedly one of the “bread baskets” of SVG, full of historical significance and of whose inhabitants proudly possess the indomitable spirit of our first National Hero, the Right Excellent Joseph Chatoyer.

What really drove this young man who, as a full-time student at the then St. Vincent Technical College pursuing a promising career in general engineering, to enlist in the Royal St. Vincent and the Grenadines Police Force on Feb. 28, 1981? Well, according to Humphrey, “it was the call of duty and devotion to country” that propelled him to make that decision, one which he absolutely has no regrets about making.

He received his initial six-month recruit training at the Regional Police Training School in Barbados. Having completed his training, the then PC 90 Humphrey, returned to SVG better equipped than when he had left to serve his country. And served he did.

During his career, Humphrey has worked in every policing district except for Mustique.

This versatile and “well-rounded” officer also worked at Immigration Department, Special Branch, in prosecution and, yes, he has for many years, helped to mold and shape the minds of future officers of the Police Force during his attachment at the Old Montrose Police Training School as an erstwhile instructor.

It was at that time over 23 years ago when I joined the Police Force that I first got to know Asp Humphrey. He was one of my instructors alongside then Sergeant Jonathan Nicholls, Corporal Renford Aberdeen and Inspector Ronald Christopher as Chief Instructor. I vividly recall on one occasion when I went to the Training School (that was before I actually began training) to process some documents as part of the preparatory stage and met then Sergeant Humphrey sitting in the Instructors’ Office. Due to my naivety at that time, I was dressed in a pair of black jeans and a sleeveless jersey. As I entered the office, Humphrey used some language on me; they were as colourful as the rainbow, but he advised me on how I must attire myself if I wanted to be a police officer. As a result, I was sent home and told to return on the next day.

And from that day until now, he has been “looking out” for me. Through my policing career, Humphrey has been many things to me, including a mentor, confidante, and friend in every sense of the word.

He was a very efficient instructor — very jovial and personable, but when it came to the business of training, he was “dead” serious. He would smile with you and “lock you up”, a phrase that is used when a recruit contravened the rules of the Training School. Because of his no-nonsense approach to recruit training, Humphrey earned the sobriquet “Beast” from the recruits of Course #9.

Undoubtedly, the Police Force has transform Humphrey into a “better man” and conversely, he is leaving the police force a “better” organisation than how he met it.

A significant number of police officers from Greggs has and still continues to serve in constabulary but it must be noted that Humphrey is the first of his compatriots to have reached to the “officers corps” level in the force; his closest rival being the rank of sergeant.

This officer is not one who is in the habit of boasting about his ability or accomplishments; he went about his duty with quiet dignity and resolve and many of his colleagues have attested that he has played an important role in their careers by imparting some of his vast policing knowledge and skills to them.

It is my steadfast belief that to have served one’s country is one of the noblest things any citizen can do. Humphrey has attained that honourable status my friend, you have served the people of SVG for over 35 years; and because there is always a beginning, there must be an ending. And while you have reached that stage in your policing career, I believe that the good Lord has many more assignments in store for you, my brother. As the Apostle Paul asserts “I have fought a good fight, I have finished my course, I have kept the faith; henceforth, there is laid up for me a crown of righteousness, which the Lord, the righteous judge, shall give me at that day: and not to me only, but unto all them also that love his appearing”. ASP Humphrey, take comfort is these words, my friend, and if you fail not, you, too, will receive that crown of righteousness from the Lord Jesus Christ. I wish you a very productive retirement.